Welcome to another Sunday of talking about the shows that made us laugh, cry, go awww and, of course, look around and wonder what in the world was happening. If it made us feel things, whether they were good, or bad, then this is where we talk about it. This is where you tell us if you agree. This is where we let it all out.

So, without further ado, here are these week’s picks:

Badass Female Character of the Week

Marta: Both Amy Santiago and Rosa Diaz on Brooklyn Nine-Nine. Their A storyline this week really allowed for them to shine as great detectives and as even better partners, plus it gave Melissa Fumero and Stephanie Beatriz a chance to prove that they are incredibly comedically talented. They’re one of the healthiest female friendships on television, and I’m constantly proud of them.

Mimi: Jiya from Timeless, she killed a RH agent, stole the lifeboat, and lived in the past for 3 years before the TimeTeam found her. Also she predicted Rufus’s death all season and it still broke her when it actually happened.

Lariel: I also have to go with Jiya. In addition to everything Mimi said, she sent a coded message in KLINGON to the Time Team, in a book written by Lucy and her mom. That was pretty incredible thinking. And she proved she could handle herself with the roughnecks of San Francisco’s Barbary Coast days.

Janelle: I completely agree with Marta. I loved the development between Rosa and Amy on Brooklyn Nine-Nine. I especially loved that on the episode before Amy’s nuptials, their storyline had nothing to do with wedding planning- it was all about work!

OTP of the Week

Mimi: Lyatt is back! Lyatt is back for me ya’ll! Wyatt told Lucy he loved her, FINALLY! I was comforted and sad and teary eyed for them. I need more of their journey.  I LOVE THEM!! I LOVE LYATT!  OTP FOR LIFE.

Lariel: Tough choice – but I’m going with Phillinda on Agents of SHIELD. It breaks my heart to think we may be losing Phil for good, but I’m glad he’s getting to live out his final days with Melinda in that magical place, Tahiti.

Janelle: Riya all the way! Jiya and Rufus’s passionate kiss before Rufus’s “death” (quotes because they are going to go get Rufus from the dead) made my heart explode. And maybe some other parts felt explosive as well! I love the journey RIya had over Season 2. It was rich, complicated and had nothing to do with a love triangle or jealousy. I love that about the ship and I love that Timeless includes a ship between two POC that is given actual development and screen time.

Moment that made you collapse into a puddle of FEELS

Lizzie: The death of Rufus, on Timeless. I didn’t expect them to do it, but then it was so obvious it was coming, and yet it still hurt like a bitch. When Denise hugged Jiya, I just lost it. When Mason lost it, I just sobbed even more. Every second without Rufus was like a punch in the gut. I don’t like it. I don’t want it. I refuse.

Marta: Adding to what Lizzie said, the moment Wyatt told Lucy that he loved her on Timeless because Rufus would’ve wanted him too. I was convinced Rufus had to come back somehow, but, as if Mason and Jiya’s tear-jerking conversation wasn’t enough, Wyatt admitting his feelings to honor their dead best friend just broke me. It really hit me that, despite me being convinced that Rufus was going to come back somehow, these characters really thought they’d lost him forever and I couldn’t bare how devastated they were.

Mimi: I think all of the couples on Timeless this week gave me feels. Riya, and Lyatt brought it this week. Rufus dying and Jiya being a mess because she felt he was “lost ni time and space.” Wyatt Finally admitting to Lucy that he LOVES her and that he was an ass this entire season! I always love them, but this week was all so tragic and beautiful at the same time. #renewtimeless

Hillary: Turns out that Grey’s Anatomy actually gave Arizona and April their happy endings! Don’t get me wrong, still pissed about them leaving and frustrated that the showing is losing great areas of representation, but I will take the silver lining and be thankful how they were seen off. Finding out April is living life in a way that fulfils her heart and with Matthew was touching. The FEELS came when the final song of the evening featured the lovely Sara Ramirez’s rendition of Brandi Carlile’s song “The Story”, and when we found out that #Calzona was being hinted at for end game as Arizona said goodbye.

Lariel: Now this one, I can’t choose. We lost so many characters we love this week! Rufus on Timeless, Quentin on Arrow, Fitz and apparently also Coulson on Agents of SHIELD – I went through almost as many tissues as I did for the season finale of The Good Doctor a few weeks back. But I think one of the most heartbreaking things for me was our last sight of Selina Kyle on Gotham, heading into emergency surgery and begging Bruce to stay with her. It was a promise he couldn’t keep, and it made me so sad for her even before we knew how severely she was injured.

Janelle: I cried throughout Harriet Tubman’s scenes on Timeless. When she shared that she has visions and saw Rufus in the Lifeboat, I got goosebumps. Then, when she showed up with the children surrounding her, I just couldn’t even handle it. KNowing that Tubman really existed, and so did the people who wanted to kill her and the Underground Railroad, that gives me all the feels in all the ways.

Moment that gave you Hope

Lizzie: Tomb Raider Lucy and Hot Youth Pastor Wyatt getting off that time machine on Timeless, looking calm, confident, like they’ve been having sex on the reg and like they’re READY TO GET RUFUS BACK. Hell yeah.

Mimi: I will give a head nod in agreement with Lizzie. The future of Lyatt looks AMAZING. I am here for it. I need it on my  t.v. screen now. I need to see them fighting together, now. I need Rufus alive after future Lyatt helps present Lyatt get him back NOW!

Lariel: I’m gonna say 5PM Pacific time on Friday. Quitting time on the West Coast. We got that far with no word on Timeless’ fate. As frustrating as it is to wait, this is like waiting for a jury to return a verdict. The longer it takes, the better it tends to be for the defense. In this case, Timeless is the defendant.

Janelle: Oh wow. I DEFINITELY agree with Lizzie about Future Lyatt (the sex having, not necessarily the Hot Youth Pastor– I think of him as Steam Punk Rock Wyatt). THat was some instant mental fanfic right there. But my moment of hope was on The Handmaid’s Tale when June whispered to her baby “I’m going to get you out of here, I promise.” The episode almost broke me and the hopeful promise was the tiny light I needed to continue. I also need to say that Megan Markle marrying Prince Harry, with Lucy in attendance to fight the sleeper agent, was a soaring and hopeful moment for me.

Quote of the Week 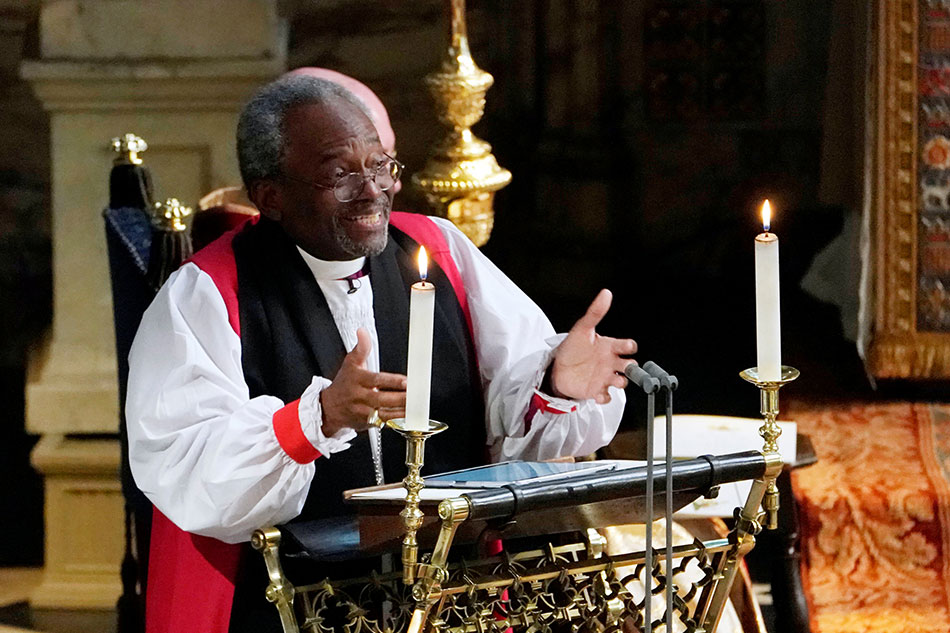 Lariel: “Think and imagine a world where love is the way.” – Rev. Michael Curry at the royal wedding of Prince Harry and Megan Markle.

Lizzie: “None of us have anything anymore except each other. That’s how we’ve survived this long. No matter how bad it gets, we’re together. We take out Rittenhouse together. We’re going home together.” – Lucy Preston on Timeless.

WTF Moment of the Week

Lizzie: Every. Second. Of. NBC. Delaying. A. Decision. On. Timeless. Like WTF NBC? What’s up with that?

Marta: Is it too late to say FOX cancelling Brooklyn Nine-Nine? Because that, for sure. But also Barry’s likely murder of Detective Moss on Barry. Did not see it coming at all.

Mimi: Co-sign with Lizzie. WTF NBC! I have never been this stressed out about a television show in my life. I need a valium to cope right now. #renewtimeless

Lariel: They let Ricardo Diaz LIVE on Arrow? Now, I have been complaining that too often the Arrowverse kills off the villains. Cayden James, Adrian Chase, Damien Darhk, Vandal Savage and Ra’s al Ghul all bit the dust on Arrow. Damien and Savage bit the dust twice, since they were also killed on Legends (three times over for Savage). Ricardo Diaz should have joined them, but no. The whiny weasel of a crime lord lives on.

Janelle: I 100% agree with Lizzie. I get angrier by the hour. Not only is NBC refusing to see the truly incredible fan base for TImeless, their delays impact the show’s potential ability to be picked up by another network. I also don’t appreciate that us Brooklyn Nine-Nine fans are in the uncomfortable position of having to be at once delighted by the show being saved AND terrified that Brooklyn Nine-Nine more or less took Timeless’s spot. NOT COOL NBC.

Agree? Disagree? Have any more feels? Share with us in the comments below!