Finales are always bittersweet. On the one hand, they should (ideally) wrap up loose ends, give ongoing arcs a satisfactory conclusion, and tease fans with hints of what to expect in the future. On the other hand, there’s that long, unforgiving wait between seasons. For the most part “We Are the Flash” – The Flash’s fourth season finale – was successful.

With this season finally at an end, it seems the perfect time to look not just to the recap of the finale but what it might mean for each character’s future.

I know Barry isn’t a perfect character, but I love him anyway. Frankly, I probably love him in part because he isn’t perfect. So although I can’t necessarily see why he really missed Ralph, I’m glad that his guilt is assuaged. That doesn’t mean I want Ralph to stick around, but, sadly, I don’t think the show runners share my view.

There were a couple of shining moments for his character this episode. None shone brighter than the end of the episode. His happiness to be with his family and friends. His relief that the evil was – at least for this moment – vanquished. And, of course, his moment of looking to the future and wondering if he’s quite ready for kids just yet. (Naturally, right before his daughter knocked on their door.)

Grant Gustin does a phenomenal job playing Barry in moments of sadness and triumph. However, he’s never quite as enjoyable to watch as he is when he’s playing a man happy, at peace, and content in his life with those he loves the most. Season after season, we’ve seen him end the season in a dramatic and emotional moment. This year, he was allowed to be happy. It was wonderful to see.

As for what Nora’s appearance means for his arc next year? Well, absolutely nobody knows better than Barry the consequences of time travel. And nobody probably knows better than him what might push a speedster to take such a drastic step. I hope they remember that when they go into next season. I hope, whatever caused Nora to travel back in time and perhaps mess up the past, they allow that moment of understanding.

This season, I was dissatisfied with what felt like the diminishing of Barry to build Ralph as a hero. I may not know what they have in store with this cliffhanger, but I hope it means the Flash will be back in the spotlight as the show’s hero. Where he belongs. 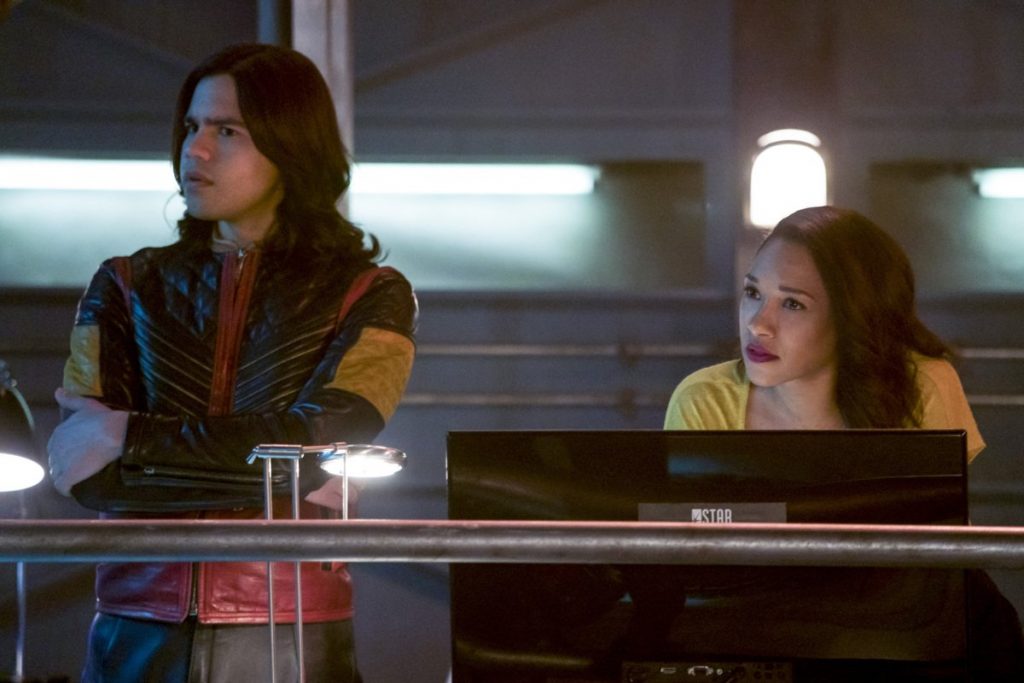 Heart of the team and of the West-Allen family. Barry’s lightning rod. Reporter. Team leader. And, now, matriarch of the Flash family. We got glimpses of all of that this episode. She not only helped the team in their fight against DeVoe; through her reporting, she helped Barry get his job back, as well. Dare I hope for more reporting and more of CSI Barry next season? Well, hope springs eternal.

The love she shares with Barry helped him fight DeVoe. She was instrumental in getting Marlize to help them bring him down. “We are the Flash” indeed.

Iris West is amazing, and I can’t wait to see more of her as reporter, lightning rod, and perhaps even team leader next year. Yet, as excited as she was about having a baby sister, will she be as excited about having a daughter from the future? She and Barry know well the consequences of time travel, so she’s got to be heaving a heavy sigh at the very least.

I can’t wait to see how Barry and Iris try to explain their frustration at dealing with an adult daughter they just met with their therapist. Maybe the team should just put her on retainer now.

Naturally, the finale brought the DeVoe’s story to an end. In the beginning of the season, DeVoe showed great promise as a villain. While the actor did a very good job, his storyline fell a little flat. Frankly, his plan was a bit silly and not terribly emotionally compelling.

Of course, on a show like this, you know the hero will ultimately prevail. However, there is always the chance he might take some degree of loss along the way. With no chance they’d remove science from the show, though, there was no way Barry could be anything other than entirely successful.

It was only fitting that Marlize would help bring Clifford down. That said, I couldn’t help but feel she deserved a bit more of a moment of retribution for all he had done to her. However, I was glad that Marlize herself was redeemed in the end. She may not be back next year, but she could theoretically return in the future. I would be interested to see what they would do with her, in a story in which she’s pursuing her own goals. (Plus, the actress seems like such a sweetheart behind the scenes. I’m going to miss her.)

Cecile finally had her baby! And, of course, Joe barely had time to process that before his future granddaughter came on the scene. There is absolutely no way that baby is a newborn, but she is adorable. And, honestly, is that the strangest thing this show has ever done?

If there was one thing their scenes really drove home for me, however, it was that the show really needs to branch out of S.T.A.R. Labs. No, I don’t expect them to fully retire the set. Nor do I realistically expect them to ever get rid of the team atmosphere. But when a woman can’t even have a baby in a hospital because everything happens on that set? They need to expand the world more. For pity’s sake, let these people get out of the lab more!

Since it doesn’t seem like they’re gender bending Daniel West, I can’t really predict where this story will go next year. However, I think they’ve floundered with Joe when they haven’t needed him in the “paternal advice” role. This undoubtedly opens up many more opportunities to show him as a loving father, which may have been their ultimate goal all along.

One question remains: Does she or does she not call him Paw-paw?

Sadly, there isn’t much to say about Wally this episode, since he only came in as a surprise towards the end. But he’s back! I’m glad to see him confident and self-assured, though I’m not entirely sold on the idea he wasn’t in the first place. With next season’s storyline seemingly focused on the West-Allen family, does this mean he’s back for good?

He better be back for good.

Next season, I’m hoping that they give Cisco a story. Don’t get me wrong. I adored his scenes with Cynthia. I think there was some interesting potential in the Breacher plot, so it’s disappointing that went nowhere fast. But outside of a few episodes regarding his love life – and acting as Harry’s babysitter – Cisco didn’t really have a story this year. Though I can’t deny that the moment he reconnected with a mentally restored Harry was quite sweet.

Unfortunately, this episode did little to hint at what Cisco’s story will be next year. Todd Helbing hinted that he wanted to explore the characters’ lives outside of the lab next year. Since that’s an area where they’ve dropped the ball for far too long, I’m all for it.

Somewhat surprisingly, Killer Frost didn’t make a return this episode. On the other hand, it seems at least one plotline was cut, since we were left with one cliffhanger and not the promised two. Could this have been the second cliffhanger? If so, there’s a chance we’ll find out more at SDCC this summer.

I’ll be honest. If Caitlin does go evil as Killer Frost (as many have predicted), I wouldn’t be surprised if the resolution of Nora’s time travel plot left her firmly on the side of good. They may want to play with the evil side of her character for a while, but I don’t see Danielle Panabaker going anywhere any time soon.

After using the thinking cap one more time to assist the team, Harry devolved into Barry’s word jumbled state from the premiere. Happily, in the end, Marlize gave the team the means to get their friend back.

I admit I was a little disturbed that Cailtin and Cisco acted like Harry’s loss of scientific knowledge was a fate worse than death. I know that had been a part of him before, but he was alive. He had his mind back. And he was happy. Their level of chagrin and determination to get his intelligence back (contrary to his express wishes) was a bit over the top. By now they should know that there is more to Harry than his intelligence, and scientific knowledge isn’t everything.

In fact, the idea that Harry had value outside of his scientific knowledge was a rather big part of his character arc in the end of the season.

With his mind restored – if not his understanding of theoretical physics – Harry decided to return to his Earth to be with his daughter. It’s a nice ending for the character, but it doesn’t give a lot of insight into what the new version of Wells will look like next year.

I know they have fun coming up with new characters for Cavanagh to play almost every year, but it’s getting a little exhausting.

Oh yay. He’s back. He’ll probably be a regular next season. Oh. Yay.

I imagine there will be a lot of push and pull with Nora next season, as Barry and Iris both have a crash course in how to be parents of a child currently their own age. If they scold her for messing with time, is that weird? Then again, she’s Barry’s daughter and a speedster, so shouldn’t she know better? He did tell her about the potential consequences, didn’t he? Wait, did he?

I don’t know what compelled her to come into the past in the first place. I also don’t know what mistake she made when she was here. However, with this cliffhanger, The Flash is set up perfectly for a storyline with a lot of humor and a lot of heart next season. Fall suddenly can’t get here fast enough.

The Flash returns for season 5 this fall on The CW.