9 Ways To Get Your Basic Bitch On For Fall

Home » 9 Ways To Get Your Basic Bitch On For Fall

Oh, every year I make fun of how basic I truly am, but I have to embrace it. I am the epitomy of basic and we’re heading into fall, which is every basic bitch’s favorite season.

It’s the time of year where I can put away my shorts, start shopping all the sales, and eat carbs. Yes, carbs are an important part of this. Why? Because all of the over-sized shit that I am going to eat is going to be hidden by the over-sized sweaters that I just bought at Target, because they were 25% off. Don’t judge – I can’t pass up a Labor Day sale and so I now have turtlenecks. That’s totally fine.

Loosing 231 pounds gave me a turkey neck. And don’t ask me to gobble, I will cut a bitch.

Now, I know what you’re thinking. WHO IS PROUD TO BE BASIC? Ummm this girl is. I mean, I am not the Blaire Waldorf level of basic, that’s what I aim to be. I’m the poor version of basic, and so my list isn’t going to be like break out the Chanel (I can’t even afford the knock off ones down on Canal Street). It’s going to be all Old Navy, knockoffs, and acting like you give a fuck about shit you don’t.

Let’s break down my level of basic and how you can achieve this low bar lifestyle.

I will be the first to say it: PUMPKIN IS GROSS. Unless it is made in a pie, I don’t want to be having it. But, sacrifices must be made for the sake of basicness. It’s the time of year where you suck up the fact that you may not like something, and you eat and drink and light every fucking candle that is pumpkin until you puke.

I sighed when Starbucks announced that they were releasing their Pumpkin Spice Latte early this year. Like what the fuck did I do to you, Starbucks? Oh ya, I spend like way too much money there (don’t make me add it up, I will get sick over the fact I could probably afford a Chanel if I gave up Starbucks). But Starbucks decided that they were going to put this shit out into the world and we all have to suffer.

So my normal Sugar Free Vanilla Almond Milk Cappuccino has to wait. Which, I mean if we’re being honest, their Almond Milk leaves the after taste of plastic, so maybe they are doing me a favor? But let’s get back to it.

Pumpkin – you make sure that EVERYONE see’s you eating and drinking things that solidify your basicness in public. Save the stuff you like for home. Hidden. Let no one see just how much Pumpkin is the worst part of being basic.

Unless it’s Thanksgiving and a pie. It’s the only acceptable thing.

BREAK OUT YOUR UGGS

If you don’t own UGGS – there is already a problem with your basic bitch achievements. Now, I am not saying you have to own the overpriced AF real ones (though I do own 6 pairs, and I am okay with that).

Break that shit out. Take them to the dry cleaner, make sure they are fresh to go. It doesn’t matter if it is not cold, you put that shit on your feet, and forget that you are sweating and are going to need to make a return trip to the dry cleaner to get out the stench.

Just make sure you tip them well.

Wearing shorts? Put on your uggs.

Ready to go to the beach and rocking a swimsuit? UGGS, bitch. That shit needs to be on your feet.

Anything else is not fall attire and if you aren’t rocking your UGGS, revoke your basic bitch card now.

Ugh, I am all for everyone can wear anything. BUT plaid is not flattering. IT’S NOT (don’t @ me). But like you have to gag on Pumpkin, owning plaid is something that you must do.

SACRIFICES MUST BE MADE.

Now, if plaid is on a hot lumberjack that I can have sex dreams about, I can take it. Plaid on me? Nope. I don’t like it. BUT, I take that flannel and I wrap it around my waist like it’s a hoodie and I fake that I love it.

I pay extra for the flannel with the hoodie on it, so I can look extra basic and extra like I raided my Grandpa’s closet.

You can thank me later for your flannel, leggings, and UGG combo.

Look, the only good thing about flannel is that designers know that it’s an important basic bitch accessory. They are making the shit in a lot of colors, so you can find something that you can love. Or you know fake it.

TIE DYE THE FUCK OUT OF YOUR SWEATSHIRTS

Oh I love me some tie dye, and I am so happy that this shit is back is style. I love that I don’t have to make it, but I can if I want to.

The GAP (my favorite basic bitch store – which hey, is like shopping at Macy’s for my poor ass) has supplied me with several sweatshirts to accessorize with my leggings with.

Now fall is supposed to be taking away color, but with tie dye you get those pops that you want.

And if you can’t find some tie dye that you love, Amazon has some tie dye kits and they are like 15 bucks and you can make your own masterpieces or some ugly shit that you can claim your niece or nephew made for you, and you’re being a good person wearing it.

Sure, your living space is already decorated, BUT hear me out. You can put all that shit away and decorate your house for fall!

When is a scarecrow on the desk and a hay bale in the hallway going to be more acceptable? It’s the time of year where you’re going into at least 4 solid months of decorations.

Orange doesn’t look good any other time of the year. I don’t care what you say – I stand by that statement. Orange barely looks good on an orange.

WEAR LEGGINGS WITH ALMOST EVERY OUTFIT

There is a big difference between yoga pants and leggings. Look yoga pants are allowed most of the year, but this is the time of the year that you bust out the black solid leggings and you pair them with EVERYTHING.

And here’s the thing, don’t be fucking cheap and get low quality ones. No one wants to see your ass crack when you bend over through cheaply made fabric.

Just don’t do it.

You need to bust out your leggings and plan your outfits around them at the very minimum 3 times a week. If you fall below that quota or you try and pass off yoga pants as leggings, you are failing. Don’t fail at being basic.

PLAN OUT YOUR HALLOWEEN COSTUME NOW

Halloween is the holiday that you need to worry about right now. No, I am not joking, it may be 8 weeks away but it’s of the utmost importance that you are planning your outfit out now.

Look, I get that we all have friends and you want to be good to them. But this is the time to outshine them. These bitches probably one upped you a few times this summer, as you were tortured with weddings as a reminder that you have failed and are alone.

So Halloween is your time. It’s the time where you get to outshine them, and you get to be the one to take the hottie home for that one night stand that you’ll ultimately regret and forget. Unless he’s like a stage five clinger, and you have to get a fucking restraining order because you were just that good.

This is where I fail at my basic bitchness. I HATE football. I however, do own a t-shirt or two that I can wear on a Sunday to make it look like I care.

However, you will not catch me dead watching a football game.

But tailgating. Hello, anyone should know how to embrace that. You drink alcohol and you eat red meat and you scream when everyone else does.

And when people start talking about football around you, ignore them. Concentrate on anything else. And I do mean ANYTHING else.

But you can obtain a basic bitch point for being able to tailgate. You get an extra one if you actually care about football.

I’ll gladly not take the extra one there. 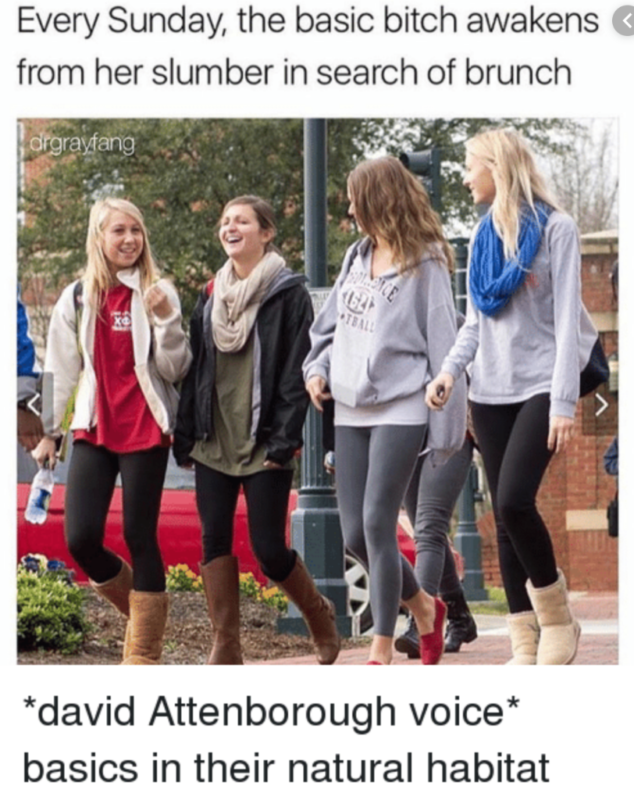 Did you forget that it’s the time of year that YOU CAN EAT CARBS? So you know what you get to do, you get to spend time brunching and eating a stack of pancakes like they are the only fucking thing on earth. Slather on the butter. Pour on syrup.

It doesn’t matter what it is, YOU FUCKING BRUNCH.

Do you have your basic bitch card? What qualifies you as a basic bitch?

'Carnival Row' Season 1 Review: The Good, The Bad, and The Ugly