Your Playlist is Incomplete Without Alec Benjamin

Home » Your Playlist is Incomplete Without Alec Benjamin

The song begins clearly and quickly, not lingering on any word, and with a melody that repeats itself in a way that makes the first verse feel like clockwork. It’s appropriate. Water Fountain is about a lost relationship. You’re no longer caught up in the whirlwind of love that makes you want to linger and hope. The quick pace drives in the sentiment of the lyrics, which is a signature of Alec Benjamin, who never lets his technique feel like mere musical style, but always wields it with purpose. This thoughtful and deliberate use of tempo and lyrics makes him an artist I can’t stop listening to.

If you’re new to the 27-year-old American singer-songwriter, I recommend you begin with Water Fountain.

The most captivating part of the song is its pre-chorus. Here, Benjamin imagines an intimate exchange between his ex and her new boyfriend- “Now he’s grabbing her hips, and pulling her in/ Kissing her lips, and whispering in her ear.” After the first two verses whose melodies had a sense of completion, here, every line leaves off in a crescendo, building up towards a climax and increasing the urgency of the story. And what’s interesting is that while it has a sense of rightfulness and hurt, things that come with the messy territory of broken relationships, it is also incredibly sexy.

Even when it’s about intimacy he’s rejected from, it is far sexier than it is sorrowful. The song no longer evokes pain and reminiscence alone. It has gone further, bringing fun, light elements into it, while still marked with brushstrokes of hurt, not because of the melody, but because of the circumstance. And when the pre-chorus reappears in the latter part of the song, it is no longer an imagination of his ex and her new lover, now it is “Now I’m grabbing her hips, and pulling her in/ Kissing her lips, and whispering in her ear.”

Finally, the sexiness is rightly placed, but hearing it after its original context, you can’t separate it from what later happens to them, just as he can’t. He’s not using repetition only for catchiness. His repetition unfolds a new layer of meaning to the story he’s telling, with each verse heightening the emotional complexity of the song.

Alec Benjamin does complexity in a way that feels so easy. Consider these lyrics from The Way You Felt

“Is your heart just preconditioned for brevity?

I don’t mean to accuse you of refusing longevity

But I cannot excuse you for abusing my empathy”

Ordinarily, these are cumbersome words I wouldn’t think of saying, especially all at once. But he weaves them in so smoothly with each other and with the swift pace of the song that they become not just effortless, but also the only fitting words.

Benjamin is, by no means, dealing with light subjects, given the way he delves into different kinds of heartbreak: feeling used, lamenting old relationships, not being seen romantically, and more. Yet, his songs rarely feel heavy. Despite the depth of emotion he tackles, you don’t come away feeling emotionally exhausted.

One of the main reasons is his tempo. The other is the texture of his voice. He is buoyant and nimble, with a high pitch that allows the heaviest pain to float about leisurely. If you’re going through a heartbreak yourself, he is the artist you should listen to when your hurt is too much to bear. He will acknowledge and empathize with you, but he’ll also show you that having sorrow doesn’t mean you have to bear it sorrowfully.

Alec Benjamin is slowly getting the recognition he deserves. In 2018, his single, Let Me Down Slowly, made the Billboard Hot 100 chart and reached the top 40 in more than 25 countries. This song appears on his mixtape, Narrated For You, which also features Water Fountain. In May 2020, he released his debut album, These Two Windows, which has gems like Oh My God, and I’m Not a Cynic. His nearly 4 million YouTube subscribers attest to the fact that I’m not rambling without reason. So, if you have a thing for soft and up-tempo music with articulate emotional intricacy, Alec Benjamin is the artist for you. 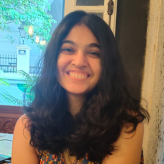 21-year-old pop culture writer from India who has spent a better part of this year listening to Olivia Rodrigo. You can find her doing philosophy stuff at other times.

You Had Us At Sophia Bush

Buy Us a Cup
Registration is disabled.