In this episode of Spinning Out, we examine a little more of Jenn and Kat’s friendship, the ramifications of it, and the way that everything is changing. I am a little confused by the description on Netflix, “Carol’s recovery has a shaky start. Kat grows closer to Justin, while a fight with Jen has bitter consequences. Marcus faces a hard decision.”

Ummm… Marcus isn’t in this episode.

But let’s break down what is.

Carol has been in the mental hospital getting better. This means that Kat has been watching Serena – because as Kat puts it – “I wouldn’t let one of your boyfriends watch her.”

I get that Kat is mad. I truly get it. And just because someone is getting well, doesn’t mean that you have to forgive them. But I do feel like what Kat should get is that Bipolar Disorder is not her Mom’s fault and that she herself, has gone through ups and downs. Kat has really got to be open to change. I know that it isn’t easy. But who Kat is doing a disservice to – is herself.

I have to admit – I was a little shocked that Mitch was the one bringing Carol home. He’s dove head first into a really complicated situation that I don’t think that he is prepared for. But I also get that he loves Serena (not in a creepy way) and that he’s invested in this family. But I don’t even think Mitch knows where to tow the line.

When Serena comes home – after heading out with Justin’s brothers – and Mitch catches her icing her wrist – I feel a little confused. Why? Because he’s taking on the “dad” approach and the coach approach. Which one is he? What line is he towing?

Mitch, in my opinion, is getting over some shit from when he lived in Boise and he’s not dealing with it the best way. He’s just not dealing.

THE HARNESS WILL CATCH YOU

One has to love Dasha. She’s a bad ass who really doesn’t put up with anyones shit. Dasha is someone we can all learn and grow from.

But when she tries – when she does it – and lands that jump – you can’t help but jump up and scream for her. This girl is fierce. She’s trying and she wants this.

I think that one of the most beautiful things in life is when you can see that someone loves someone else. It could be when they don’t see it themselves, but it could also be when they see it. Love is this strange thing. It’s this moment when guards are down and feelings are heightened and there is this beautiful moment of vulnerability.

And I think that’s what I love so much and Kat and Justin. Both are hardened, have had everything go wrong, but in the same breathe, the are vulnerable with each other. And the beauty of that is a rare thing.

But what got me was seeing Justin give up going out with others, because the only person he wanted to be with – to truly be with – was in the same room as him. When she was leaving and he zipped up her jacket, I legit screamed at my television for her to stop being stupid. But when she went back to that room – when she let her inhibitions down – I applauded.

Because for Kat, allowing someone to love her is growth.

THERE ARE 100 OTHER REALTORS

Carol’s trying to get a loan – a $10,000 three year loan. She needs the money in order to get her treatment and she needs treatment in order to stay healthy. There is a big issue happening for Carol and this is the point in time where everything seems too much. She could regress. She could make harsh decisions that will change everything.

Now these two being friendly – I never saw that coming. I would think that Mandy would take her by her hair and string her out to dry for the way that Carol treats Kat. But Mandy, being the sweet thing that she is – decides to show up for Carol. She decides that she’s going to help, even though being there for Carol may not be the thing she wants the most.

When she arrives at Carols, she has a panic attack. She mentioned that she would have killed to have grown up in a home like this and one has to wonder – where did Mandy come from? She tells Carol a bunch of stuff that gives me an idea – but it also makes my heart break for Mandy. She once had a child – at 15 – and gave her up for adoption.

Letting down her walls and letting Carol in, causes Carol to let down hers. I was shocked when Carol admitted that Kat wasn’t a mistake and that she had always said that because it was easier than admitting that  she would have never gone to the Olympics.

This unlikely friendship is giving me life, because both of them need someone.

And what Mandy does next solidifies for me that she is a good person. Instead of selling Carols house, she offers her a job and tells her that James will call the bank and get her that loan.

Carol deserves a moment for her life to turn around and Mandy may not know everything that is going on, but what she does – what she does in that moment is gives a person hope. And that hope can sustain someone for a very long time. 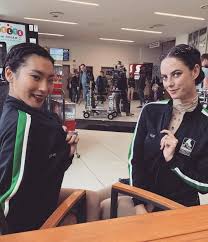 FRIENDSHIP IS MORE DIFFICULT THAN A TRIPLE TOE

Jenn’s whole life she has come second to Kat. She’s always done everything that she can to be there for Kat and yes, their friendship may not be the most healthy thing, but it has been all that she knows.

For this entire season, the biggest issue that I have had with Jenn is that she doesn’t let anyone really know her. She is under this immense pressure from her family, her church – everyone to succeed. But this is just another aspect of her life that Jenn isn’t being honest in and that bugs the fuck out of me. I get wanting to please the world, but I also know that you have to take care of yourself first.

Jenn has been skating on a hip that is busted. She’s not telling anyone how bad it is. She’s out there fucking shit up more – and instead of trusting that others will be there for her – she’s trying to be everything to everyone.

The thing that I really felt for Jenn in this episode about was that she was finally letting her walls down and when Justin cancelled on her because something came up – she wanted to talk to Kat. Kat was no where to be found. She finally told someone the things that she should have been telling Kat from the beginning.

Jenn admitted to Gabe that she likes Justin. Up until now, I have thought that the the only thing she wanted was Justin’s penis. Legitimately.

She made another stride when she finally told Kat about her hip. Because up until now – the only person that she’s been honest with about that is Justin.

I’m gonna sound like an asshole here, but the reality is that Jenn has some of the issues that she has because she has a hard time being honest. No, that’s not excusing anyone else’s behavior. I am far from that. But what I will say is that I feel like Jenn’s world is going to come crashing down around her and she’s not going to be able to stop it.

And I fear for her.

Of course Jenn hears from Leah (evil cunt) that Kat slept with Justin. She’s irate. She’s angry. And yes, she has every right to be.

But she also owes Kat an explanation. She’s not been honest with Kat about her feelings for Justin – nor did she tell Kat that Justin and her almost slept together.

But that’s not excusing anything. She had every right to tell Kat off and to tell her that she’s done coming in second to her. But it also kills me a little bit that she’s never expressed this to Kat before. She’s really done herself a disservice not telling Kat before how she feels about being second to her. This is something that they should have worked out so long ago.

If you can’t be honest with your best friend, there is a big problem. And I really hope that Jenn finds it in her heart to see that she deserves to be able to tell the world who she is, what she wants, and she’s allowed to put herself first.

All of this is so much for her and I personally think that Jenn owes herself a life filled with so much more. I think that her friends would love all the sides of her. She’s this huge character, who uses her sarcasm as a defense.

But I will also say this in the same breath – Kat owes Jenn an apology. Am I talking about because she slept with Justin? No. I am talking because your friends should never ever make you feel second or less than you are. YOU ARE IMPORTANT and FRIENDSHIP SHOULD ALWAYS BE EQUAL.

I hope this isn’t the end for these two, but if they do become friends again, I hope its out from behind the secrets and lies.

Spinning Out is streaming now on Netflix!

Hailey Bieber Talks About The Thing People Say On The Internet