This episode did exactly what I want the show to do more often. It focused on the characters and their lives and the ways they interact with each other. There were mentions of scripts, parties were held, photoshoots were done, but none of those things overshadowed the stories that were being told. In my opinion, focusing on Rainer’s struggle with sobriety, Cassie’s fear of losing a good thing in her life, and Alexis turning down a bad path because she is losing those closest to her resulted in an episode I was interested in and wanted to keep watching. Famous in Love seems to be still finding its footing, and this episode is definitely a step in the right direction.

Let’s get into all of the things I loved and loathed this week!

Every single time these two best friends are on screen, it’s a good thing. I can’t help but to smile when they joke around or comfort each other. Their love for each other is palpable. Especially when Paige opens up to Cassie about cheating on Jake with Eddie. Cassie consoles her best friend but also hold her accountable and suggests Paige be honest with Jake sooner rather than later. Cassie holds Paige as she sobs after saying, “I hate me,” for cheating on Jake. Cassie does what she can. She’s there when Paige is afraid to press play on the security footage that could reveal the identity of the stalker who has been disrupting her life. Cassie even takes on a quick social-media deep dive to see if Eddie is the stalker. It’s nice to see them together. I know they have been busy and keep missing each other, but I hope that eases up as this season comes to a close. Hopefully the last few episodes of the season and the potential third season are filled with fantastic moments shared between these awesome best friends.

You all know how much I adore Sofia Carson. I never shut up about it. She’s great. She makes me want to like Sloane even though I’m sure I can’t trust Sloane. Sloane does seem to have Alexis’s best interest at heart this week. She notices when Alexis is overworked and becomes concerned when Alexis starts popping pills and drinking way too much at the club. She takes the time to ask Tangey if this behavior has been a common occurrence with Alexis as of late and adds that she is worried about her friend. Sloane says, “She’s acting a lot like she did before the last time she went to rehab.” Sloane tries to reason with Tangey to get Tangey’s mom to give Alexis a break. She stays by Alexis’s side for nearly the entire night. She holds Alexis’s hand as she dances on a table and sticks with her as security carry Alexis out of Pablo$$’s party. She isn’t going to be treated like anything other than the human being she is, and she’s not going to let her friends be treated any other way either. I’m a fan.

Jordan and Rainer may be my most favorite part of this episode. I always seem to gravitate towards friendships that feel like family and such, so to see Jordan and Rainer come together the way they did this week was really lovely. Jordan is supposed to leave town for his deposition, but he pushes it back a day when he finds Rainer drunk on the couch. He throws Rainer a cold shower and offers to get him whatever he needs. Jordan doesn’t yell at him or belittle him. He’s there for Rainer. There’s a comfort to their friendship. This is clearly seen when Rainer starts whining about the cold shower and Jordan says, “Bro, shut up and dry off.” Also, Jordan takes Rainer to a meeting where Rainer admits to being only 5 hours sober and his desire to make amends. In doing so, he apologizes to Jordan. Then, after Rainer confronts Harper about lying about her whereabouts, Jordan comes over – pizza in hand – to sit with his friend. It was refreshing to watch.

I am the first one to admit how bored I get with Jake. Just like week was the first time in a long time that I even felt like rooting for him. He gets on my nerves more than I would like. That’s no offense to Charlie DePew, who is a fantastic actor. But this week Jake impressed me. He comes home, knows that he should apologize to Paige for the way that he acted at the film festival, reassures Cassie that her relationship isn’t doomed, and swoops in with a giant bear hug after Paige’s stalker is taken in by the cops. He did all the right things for me this week.

This is a simple and easy favorite thing. Cassie and Adam are an insanely adorable couple I have been pulling for since day one. To see them come to an agreement of plane tickets and international phone plans instead of ending things is also refreshing in its own way. With it being Famous in Love, I could have seen Cassie and Adam ending their relationship in the most dramatic way. I am so glad they didn’t take that route. It wouldn’t have made sense for them to conspire to end the other’s career out of spite or something along that line. Like Jake said, Cassie and Adam are one of “the good ones.” They have always been a sincere and honest couple. It is nice to see a couple on television argue, take time, and come to an agreement. I feel like all I ever see anymore is explosive arguments with little-to-no resolution. It isn’t always like that. Cassie and Adam prove that. 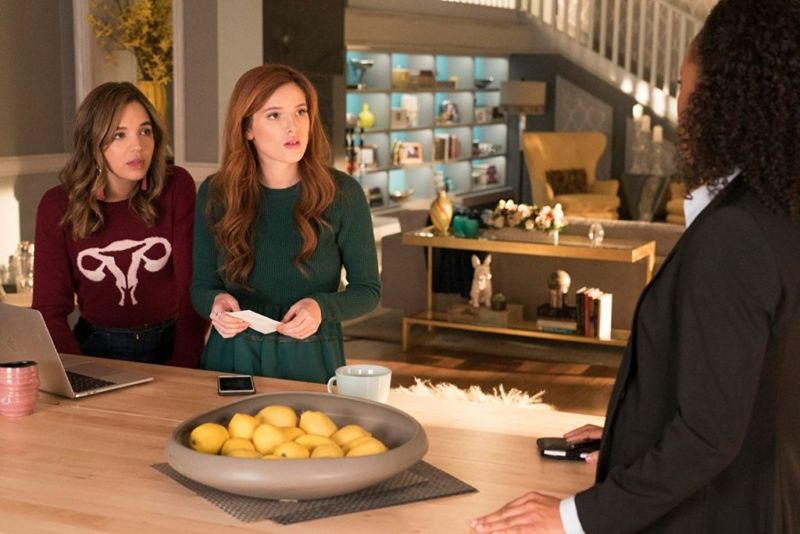 Ugh, this guy is gross. I could tell when he first “randomly” sat down at the same bar as Paige. When Paige confesses to Eddie that she has a boyfriend, Eddie gets mad and calls her out. Which, yes, Paige did cheat, but Eddie seemed oddly invested in something that didn’t seem to be going any further. I didn’t pick up on any clues last week that Paige was interested in a long-term relationship with this guy. She reminisced and talked about how good things once were with him, but she never pledged her undying love for him. Sometimes people cheat. Sometimes people have one-night stands. It was just weird to see him become so erratic so quickly. It set off some alarms. Also, he lied about how long he’s been in Los Angeles and it’s revealed that he’s had restraining orders against him before.

Easy. I don’t like Iceland because it is the place separating Cassie and Adam for the time being. Nope, I don’t want it.

Here I was on Shane’s side. He was saying nice things and not setting off any alarms. HE WAS THE STALKER THE ENTIRE TIME! He breaks into Paige’s house, says she can’t get rid of him, and that they should be together. He tries to grab her multiple times but Paige fights back. She ends up kicking him over her indoor balcony, which immobilizes him until the police can arrive.

I am so over him. I am so over him and his controlling behavior. No one needs it. Tangey doesn’t need it. He’s constantly paranoid that she’s talking to Jordan, like she can’t be friends with him. He doesn’t want Alexis anywhere near her and pushes Tangey to perform “Block That Business” when she doesn’t want to upset Alexis any more. He tells Tangey to change her clothes because the “burgundy dress will look a lot better under the lights.” He always talks over her to stifle her creative and personal opinions. He says, “Let me protect you from the people who are no good for you,” when he is the one she should be protected from. Before throwing Alexis and Sloane out of his party, he tells Tangey “No more Alexis. No ore Jordan.” He’s cutting important people out of her life. Though after their conversation, Tangey does have a heartbreaking look on her face like she realizes what’s happening. She then calls her mom, leaving a voicemail regarding her concern for Alexis. 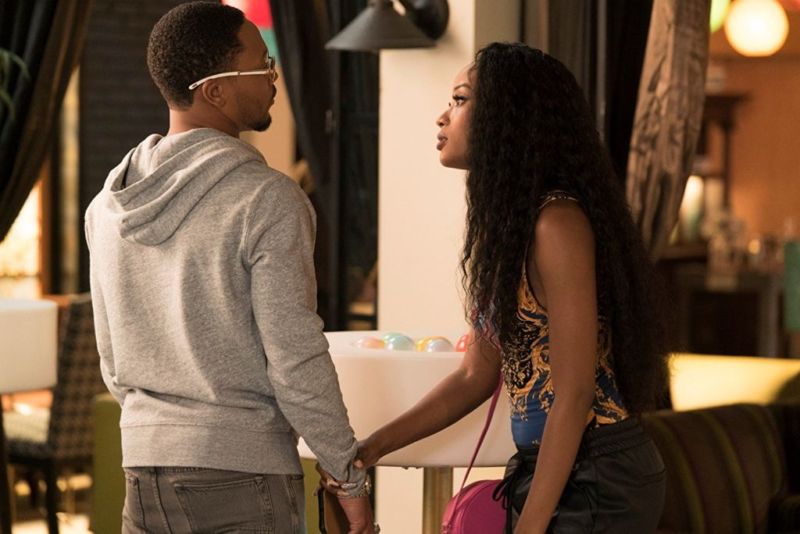 I feel so sorry for Alexis. I didn’t in the beginning. She was putting all of the negativity on herself with her reality TV show and spewing her friends’ secrets like they were her own. But as the week have progressed, Alexis appears to be lost and asking for help in the only way she knows how – acting out. I want Alexis to get some help. She needs a great support system and that is not the reality TV sphere. Hopefully things will get better for her. But knowing Famous in Love, things are probably going to get a lot worse before they get any better.

Watch Famous in Love Wednesdays at 8:00pm on Freeform!

Seven Reasons We Will Miss 'The Originals'