This is an entry in Fangirlish’s What Sports Mean To Me series, where our writers discuss memorable sports moments and how sports have impacted their lives.

We all remember our first sports love. It was the moment when sports became more than just background noise — they became something we wanted to be a part of, something that swept in and enchanted our hearts. And we had no choice.
I’ve never been the same since sports stole my heart at seven years old. It’s shaped the person that I am today, and I find myself so incredibly lucky to have grown up with the influence of sports — the magic that comes with rooting for something that’s so much bigger than yourself. All of the triumph and the heartbreak — it’s been worth it all and more.
My first sports love was the Detroit Red Wings. Hockey. Something peculiar for a seven-year old Florida girl, where hockey isn’t really appreciated in the south. But the influence itself came from my sports muse: My dad. And I’ll be damned if I’m not thankful every day for him sharing his love of sports with me and everything that we’ve shared since then. 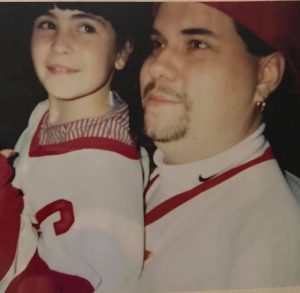 I don’t really remember the exact moment that I fell in love with the Red Wings. But I can tell you exactly where it happened. That would be at my Uncle Richi’s apartment, where you could find him, my dad, and me playing street hockey, playing NHL video games and sharing our mutual love of hockey. It was there that my curiosity for hockey began, and I began my descent into my deep-rooted love and obsession of sports. My Uncle Richi is a diehard New York Rangers fan, but he also likes the Red Wings. So it made sharing the Red Wing love easy.
One thing I distinctly remember at that Walton Lakes apartment is that my dad and uncle used to quiz me about the Wings — the Russian Five, Steve Yzerman, you name it. I’d get a dollar every time I got an answer right. And trust, I got a lot of dollars.
I count myself especially lucky — and a bit of a good luck charm, if I don’t say so myself — that the first year I became a Red Wings fan in 1996, they won the Stanley Cup for the first time in over 40 years. That was also the first year that I attended my first game, and I just remember that it was the exact day that I knew that I was in love. But that’s another sports story…
Oh, and Steve Yzerman. My first sports crush. God, I remember that vividly. There was no one that loved that man more than me. But, again, that’s another sports story for another time…
One way you can tell that I love something is how much I immerse myself in it. And I can vividly remember the two VHS tapes — yep, good ol’ VHS — that my dad bought me of the 1996-97 and 1997-98 Red Wings Stanley Cup Championship seasons. I would watch them religiously. Over and over and over and over. To this day I can still recite lines from the films. 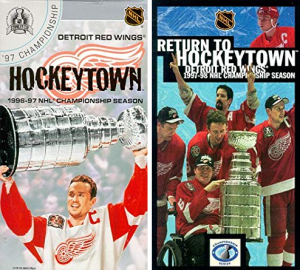 The magic of the world itself, I think, was what really drew me in. The fact that this game — this physical, beautiful, enchanting game — was so much bigger than myself was something that I couldn’t help but be wowed by. I wanted to be a part of it. I wanted to get as close to this unattainable world as I could. I wanted to be a part of that sports family.
From that fateful year at age seven, my love for sports has only expanded and deepened. I feel it every time I attend a Red Wings game. I can’t help but feel fortunate that I’ve developed this love for sports. There are people out there that don’t understand that “it’s more than a game.” And it’s not really something you can describe. It’s more something that you can feel, as a sports fan.
I’m appreciative that I get to share my love of sports with my dad. I’m appreciative of all of the opportunities that sports have afforded me. And I’m appreciative of the people that I get to share this magic with.
And while the Chicago Bears reign supreme as my favorite sports team, I’ll never forget how my first love, the Red Wings, forever shaped my sports history.

What was your first sports love? Share your thoughts here and on social media using the hashtag #MyFirstSportsLove!

You can read more of our “What Sports Means To Me” series here!

Netflix Cancels 'One Day at a Time' and We Call Bullshirt!