Legends of Tomorrow 2×15 Review : Fellowship of the Spear

Home » Legends of Tomorrow 2×15 Review : Fellowship of the Spear

For all the wonderfully strange and wild things that have happened over the two seasons of Legends of Tomorrow, it has also hit upon very simple basic things. Friendship, loyalty, a sense of belonging among other things. All of this comes to a head in “Fellowship of the Spear” as a team member commits the ultimate betrayal in the battlegrounds of World War I over Jesus’s blood and the Spear of Destiny. Only on Legends of Tomorrow would that sentence make sense.  After all a episode that stars with Nate saying ” Jesus’s blood is over there!” doesn’t eaxctly scream a boring bubble episode here. Now onto the episode!

First we go back to 72 hours before and the team is clicking on a groove. All they have to do is find the latest piece of the Spear and they will have collected the whole reality altering set. Rip reveals that he knows where the last piece is and it brings back old memories as it’s at the Legion’s base of operations. The only place Thawne can hide out from the Black speedster of death : The Vanishing Point.

Yes , it’s that Vanishing Point where we said farewell to one Leonard Snart aka Captain Cold. As the team sneaks through the base and honestly pretty easily finds the final piece thanks to Rip & Jax, Mick goes back to the exact spot where Snart sacrificed himself for the team last season.

Losing your best friend is never easy. You never get over it no matter how much time passes. Mick, for all his faults, cared about Snart. Loved him. So being back there has to take a emotional toll on him. Sara spots him there and we see a quick but emotional scene where Sara says she misses him too.

Sara is much less emotional about being in that spot but that’s just the way she is. She has to be hard on the outside or she will break down like we all would if we lost someone close to us. She connected to Leonard last year and once again felt pain seeing someone she cared about die yet again. Add to that immediately after finding out about Laurel’s death, Sara has been through a lot too this past year. That she has powered through the pain to become a great leader for the team shows how tough Sara Lance truly is.

The team returns to the ship and put all the pieces of the spear together. It connects together and words suddenly appear on the spear –“Natum de Sanguine, perditus a sanguine”. No one knows the words except for Nate ( For season 3, we need a scene of some of the team learning latin because it always seems so damn important to read latin!)

The words end up meaning “Born of blood, undone by blood” –aka a way of saying Jesus Christ’s blood created the spear and can destroy it. After a quick discussion between Rip and Sara about going to the crucifixion (She wants to, He says no because there’s some places you just can’t go–I’m with her,desperate times after all), Nate reveals that a story about Sir Gawain he read from JRR Tolkien could be the key to finding the blood. Sure why not? Once you have George Lucas on here, anyone is fair game in my book! So the team is off to 1916 France.

BACKSTREET (AND SNART) ARE BACK ALRIGHT!

Sara orders the Backstreet Boys (Rip, Ray, Mick and Nate) and Amaya to go down there and collect Tolkien. Also I promise that I will always refer to this pairing now as the Backstreet Boys till the day I die. As Rip and Nate collect up the Hobbit author and take him up to the Waverider to help, Mick and Amaya are among the wounded when Mick spots Snart. Think it’s a hallucination, Mick follows him outside and basically spills his guts about Tolkien and the plans for the blood. Not the smartest move but in Rory’s defense –He thinks he is talking to Snart only in his head. However this is very much real and going to bite the Legends in the butt.  Snart reveals to Mick he is not a hallucination via smack in the head which to Mick means that his best friend is defnitely back. Maybe a slap would have hurt less but who am I to judge how friends greet each other?

Here we get two separate but important scenes : The first one with Sara and Amaya shows again how much of strong complete character Sara Lance is. Amaya is still shaken from last episode where she peeked at her future and didn’t like what she saw. Sara, as a good leader does, sits down with her and tells her a little about her granddaughter, Vixen. It was a much needed bonding moment between the two ladies of the cast. (The only two ladies, so come on and get some more females on the ship Legends for season 3)

The other is between Stein and Mick where Mick tells him about seeing Snart again and not in a hallucination form this time. Stein is pretty rude in this scene as he questions Mick constantly and puts him down. Hope this doesn’t come back to bite the team in the butt….

So the Backstreet Boys and Tolkien go to the church and waiting for them is Snart and Damien Darhk who comes up with the idea of bringing back Captain Cold. Only this Cold isn’t the Cold that the Legends knew. This is a Leonard Snart who is way before he met the Legends and became a hero. This guy is evil to the max and trying to lure Mick to the dark side again. His words have a effect on Mick and after a quick battle, the team retreats with Tolkien and the engraving they need to find Jesus’s blood. I just typed that sentence and it still sounds more realistic than most of Arrow season 5 has been.

Back aboard the Waverider, the team is giving Mick hell for telling Snart the plan. I’m on Mick’s side as who doesn’t spill their guts to their best friend whether they are imaginary or real? Mick didn’t know it wasn’t real. Jax and Stein rip him a new one and while that is tough to hear, even worse is what Ray does. Nothing. Just stands there with his hands in his pockets.  After the bonding him and Mick have done, I figured he would be the one who stands up for Mick. So it was disappointing to see Ray just standing there silent.

This gets broken up by Amaya who has the spear and wants to use it so badly. To end the Legion, save her family, rewrite history. Sara is able to talk her down though and it is agreed that they will save the day ”the hard way”. Another great moment for Sara because if anyone would want to re-write history, it would be Sara. Save her sister, spare herself the time with the League of Assassins, maybe not even get on the Queen’s Gambit. Yet she knows that you just can’t do that. To be able to avoid that temptation makes you just not a hero but a Legend. 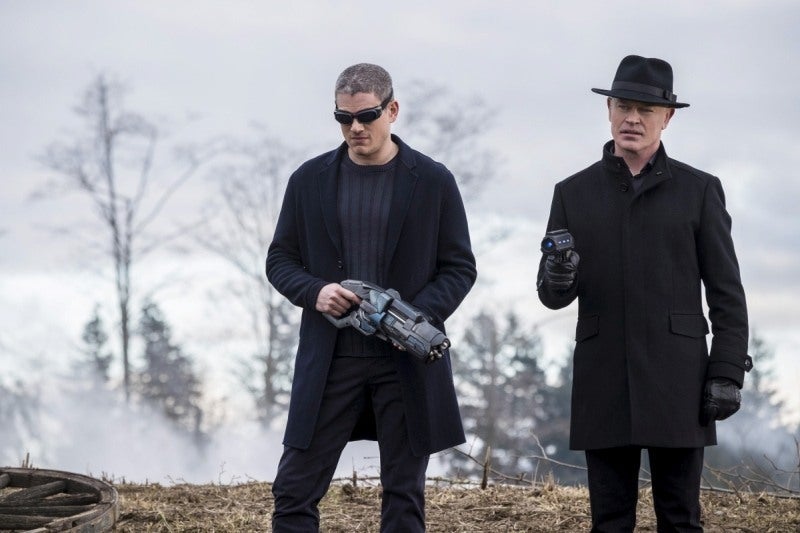 I’LL NEVER BREAK YOUR HEART (JUST STAB YOUR BACK)

So the Legends arrive at the battlefield but they are stopped by well the battle. I mean the map leads you to a battlefield in the middle of World War I, there’s going to be dudes fighting there. Rip and JRR try to get a ceasefire by talking to the British commander but he stiff upper-lips them with a no. Rip responds like how we all would love to and knocks him the bleep out. All hope is lost till Rip Hunter pulls a page out of the Lord of the Rings and delivers his best Samwise Gamgee (or Aragorn) speech and inspires the troops to cease the fighting. It works because well it would be very awkward if it didn’t and the team races to retrieve the vial of blood. Also for some reason, they bring the spear with them and give it to Mick! I mean if you all are so untrustworthy of him

The Legends get it and just as it’s about to be part time, Snart shows up with Darhk once again. Snart once again plays to Mick’s ego and this time it’s just too much for Mick. His best friend is wanting to hang out with him again and being evil has just been so much easier to Mick than being good. So Mick makes the only choice that he has in his mind: He joins up with Cold and the Legion. He asks Amaya to join him but he quickly says nuts to that. With a twinge of regret in his voice, Mick apologizes to Sara and is whisked away by Thawne as the team regroups back on the Waverider. Unfortunately the vial of Jesus’s blood is shot and with that the hope of destroying the spear.

Back on the Waverider, the team bickers about Mick’s deflection with Ray and Amaya taking it the hardest. I love this side of the team as even though they lost and reality is about to get fucked up, they are more concerned about losing their friend to the dark side. Nate offers up a bit of hope that maybe the Legion doesn’t know how to start up the spear!….Which gets quickly crushed as we go back to the Legion and see Malcolm has rejoined them with a artifact that can make the Spear work. As we fade to black, the spear lights up and trouble is about to start.

So to sum it all up: the team lost a team member, was betrayed by that team member, lost the Spear of Destiny and now are likely returning to a completely altered present. And this is still the funniest show in the DC/CW universe! Because I believe that even with all the screwups, the Legends can and will overcome this. It won’t be easy, it won’t be without messing up but if there is one thing this team has proven is that it can save time. Though this time it might be a whole lot harder and tougher. I can’t wait!

Legends of Tomorrow airs Tuesdays at 9/8c on the CW.

Supergirl: Why Karamel is My Favorite Ship on TV Right Now