Season two’s premiere was a bit of a let down, but I am more than happy to say that episode two made a thunderous (so much bad pun intended here) return to the screen this week. Everyone had a meaningful role and the politics of the episode were not only relevant, they were nuanced and well placed, but Anissa’s character stole the show. Bravo Black Lightning! Let’s get to it. 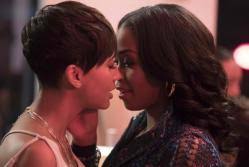 Anissa lit up the Lightningverse’s spot on this particular night. She was the caring and knowledgeable big sister who explained to Jen that caring for her body actually kept the savagery of monthly cramps away. Now how real does it get to talk about cramps on television-superhero television at that? This is the best sibling relationship on t.v.-fight me!

Then we got Anissa the mack. Anissa who hasn’t seen a date in ages, walks into a club, spots the talent, spits the game, and gets taken to a top notch hotel with the promise of private jets and all the rest of the posh life that comes with dating a pop star- after one night! Damn girl. I do have to put the brakes on Anissa’s game for one minute though. When she returns to the club, she sees her old flame Grace and tries the old “act like we cool” game. She was so wrong for that. I am guessing that the table is being set for a reunion of sorts. Grace needs to keep playing it cool though-Anissa’s not an easy one to figure out as I’m sure she knows at this point.

Next, we got Anissa the show woman. After strutting her superwoman stuff to the rescue with her dad, she decided to take some liberties with the crowd. Of course Jeff wasn’t too happy, but Anissa didn’t back down. I really loved this exchange between the two of them because it highlighted the age issue perfectly. The fact that it was still on their minds at the dinner table made it all the more intriguing.

I was really torn about this situation. On the one hand, I feel like Jen should stay away from Khalil at all costs-he works for Tobias. There’s no way he could be true to her because of the short leash he’s on and the debt he owes. Then, I saw the way he pleaded with her and the way her emotions surged when they made contact. Would it help her to have someone other than her sister to turn to? Someone who understands that she feels alone and abnormal. Perhaps her emotions are just the reason they should stay apart. Feeling so intensely for someone that you can’t think straight has to be a bad sign.Maybe they can take down Tobias together. I’m not even writing the damn show, and I can’t choose!

Lynn and The Green Light Babies I felt so bad for Lynn in this episode, but I was so psyched for her character’s agency. (The Flash, please take note of what a doctor should be doing *coughing and pointing at Caitlin Snow) Lynn’s compassion and singular focus on finding a cure for these green light victims was beautiful; it also gave her an opportunity to put some focus outside of her family for a while. Channeling her worry and her anger away from Jeff and the girls opened up the door for Issa to come in and get the help he needed; it also put Lynn on the forefront of making the discoveries that are sure to help her family and all the other victims in Freeland. Though she is being forced into these situations, she is making the best of them. Being demoted has to be a hard pill to swallow, especially when you don’t deserve it- when you were the one who saved the school in the first place, but you can’t tell anyone. That’s the breaks of being a hero sometimes, and Jeff has to be strong enough to take. Not just take it, but take it with a smile and a dance as he said.

Last week, I was pretty hard on the show. I didn’t like how it rested so heavily on celebrity appearances and popular movie references, but this week it moved away from those and still sent a strong and striking indictment of the educational system- the black man can hold the shaky school  system up on his back, but if he is too out spoken or too controversial, he can’t be it’s face- by the way, can you stay in the building and help out in case the new white principal can’t handle it though? A slam dunk! A graceful, ballet like, but then all of a sudden tongue-out in your face, glass shattering dunk. How will this work? I can’t wait to see it. I have seen it in real life, but I can’t wait to see how Black Jesus handles it.

A Few Other Things I Was Thinking:

*Tobias is just reckless as hell.

*Anissa and that hickey!!!

*A truth telling super power? What could I do with that?

*I’m glad Anissa is finally back on the medical school track. I was beginning to wonder.

What did you think of “Chapter Two: Black Jesus Blues”?

Black Lightning airs Tuesdays at 9/8c on The CW.