It’s refreshing when a show can manage to be influential in tackling important issues but also enjoyable at the same time. Where its characters are compelling yet flawed and people can find a way to relate to them. These are just a few reasons why The Bold Type is such an important show.

In “Plus It Up,” we saw our three favorite ladies deal with issues that are incredibly important and relatable to the audiences that tune in. As Jane dealt with the reality of her egg freezing process, while in the beginning stages of a new relationship, Sutton had to deal with the new boundaries that come with her relationship with Richard, as well as a struggle coworker. Then there’s Kat, who used her influence to try and save her favorite lesbian bar that provides shelter for her and other queer women in the city.

And that’s what makes The Bold Type such a brilliant show. It tackles the important issues in the reality we live in — from egg freezing to gentrification to custody issues — and not only sheds light on the issues but tries to find solutions, though those solutions might not be open and closed in one episode.

Let’s break down what went down in the second episode of season 3:

After what happened between Jane and Ben last season after she let him in on her medical issues, could you blame the girl from wanting to keep things as light and fun as possible with Ryan for as long as she could?

Now that Jane’s been given the go-ahead to begin her egg freezing process, she’s trying to keep it out of her relationship with Ryan. At first, she downplays it as not being a big deal, trying to let Ryan’s hockey playoffs distract him from thinking about Jane’s egg freezing.

But then fate, or Patrick in this case, steps in and puts Ryan directly in her line of sight. After Patrick tells Jane that he wants a new spin on her egg freezing process article — because she now works for the dot-com — he suggests that Jane and Ryan team-up to write the piece. The focus: a real-life couple working through a real-life issue and two writers bringing it to life.

Just when Jane thinks she’s pushed Ryan away, when it comes time for her 10:30 injection, he’s there waiting on her doorstep a half hour before. He missed hockey to be there for her because he wants to. Jane wonders why he’s there after she pushed him away, but he understands why she’s so afraid to let him in. But she hasn’t tried it with him yet.

Sure, Jane loves what they have right now. But because she likes him so much she tried to protect what they had and keep it all in. Thing is, this is a part of who she is. So she decides to let him in. This is something that they’ll work through together. And sure, they’ll document it for the world, but the important thing is that Ryan has got Jane’s back, and Jane knows it. 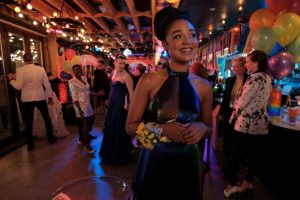 Kat Edison is an influential person that has garnered a lot of praise for her “Be You” campaign. And a big part of Kat being herself is embracing who she really is, which is a queer woman in a society where it’s not easy being queer.

Once Kat hears that one of her favorite lesbian bars, The Wild Susan, is being shut down, she jumps into action. Because if we know one thing about Kat — besides the fact that she’s fierce, proud and queer — it’s that she’s something that will always take a stand for what she believes in.

The Wild Susan is one of only two lesbian bars in the area, which makes it increasingly difficult for queer women to feel accepted and feel like they have a bar where they can go to feel that acceptance. So Kat decides to fight for the Wild Susan and for every queer woman that needs a safe haven.

Turns out the Wild Susan owes $40,000 in fines — fines that are from decades ago and that the bar had no idea about — and if they can’t produce, Wild Susan is going to be made into a condominium. Kat first goes to her local councilman, who says that there’s nothing that he can really do. They have to come up with the money if they want to save their bar.

With this attempt at gentrification of the neighborhood, Kat takes into her own hands to help raise the money. She decides on hosting a Queer Prom at the Wild Susan and inviting people that can donate some serious cash.

Ultimately, Kat is able to raise $20,000 — half of what’s needed — and she’s still told by that councilman that there’s nothing that can be done. No partial payment. Nothing. And Kat realizes that he really doesn’t give a damn about this bar or the queer women in this neighborhood.

So when Kat gets home, she does some research on the councilman and finds out that there’s a woman named Linda Zephyr that will be running against him in an upcoming election…

When Sutton made the decision to move in with Richard, she opened herself up to the struggle that comes with balancing the two parts of her life: professional and personal. It wasn’t really something she thought too much about at the time. But once she realizes that she can’t talk about some things that happen at Scarlet — because Richard’s a board member — she realizes that there’s a new boundary in their relationship.

The adjustment period is something that’s normal and expected. The first thing that Sutton can’t seem to adjust to — and downright refuses — is to let Richard’s housekeeper do her laundry. It’s something silly yet completely understandable. Sutton has never had anyone do her laundry before, so why should that change now? And that is the root of Sutton’s conflict in this episode: She refuses to change who she is just because she’s moved into a new chapter in her life.

If there’s one thing we know about Sutton is that she’s bold, unforgiving, passionate and incredibly protective of those she cares about. Typically that’s reserved for Jane and Kat, or even Richard at this point, but in this episode that extends to her boss, Oliver.

Oliver has some personal issues going on that do not go unnoticed by Sutton. He’s acting aloof, suspicious and making the kind of mistakes he just doesn’t make. She accidentally stumbles upon the truth: He’s got some legal issues that have been taking all of his attention. More important: They involve a child.

Turns out Oliver’s ex-boyfriend is in some hot water, and Oliver is trying to protect his ex’s daughter, a young girl that Oliver even lived with for a few years. With her dad struggling with drug addiction and her mom out of the picture, Oliver doesn’t hesitate to step forward lest she be sent to a group home. Naturally, this has had him on edge because he’s fearful of the process of becoming her legal guardian. Will they give this little girl to a gay black man? This is no doubt a storyline that will be a focal point throughout the rest of the season.

Sutton knows she can’t tell Richard about this — he’s a board member. If word got out about Oliver slacking on his job because of a personal issue, it wouldn’t be good. So Sutton takes the responsibility. She takes the heat for the mistakes. And she protects him, just like we knew she would.

The Bold Type airs Tuesdays at 8/7c on Freeform.