(Wo)man Up: The Power of Silence in ‘A Quiet Place’

Home » (Wo)man Up: The Power of Silence in ‘A Quiet Place’

In A Quiet Place, the sound of silence plays the most crucial role. The film, created by John Krasinski, which premiered in April of 2018, turned out to be a big hit. Although it wasn’t his debut (he earlier directed the film The Hollars), only A Quiet Place gained significant recognition. The sequel is in post-production and is planned for release in 2020. The numbers show it perfectly – 17,000,000 budget and 188,024,361 worldwide gross according to IMDB. The film beat the budget over 11 times. It’s impressive for a story that used only 24 lines of voiced dialogue, and mostly committed to American Sign Language.

Next to Krasinski (who also performed in the movie as Lee Abbott), Emily Blunt appeared as his wife – Evelyn Abbott. The plot tells the story of parents who do anything in their power to protect three of their kids – Beau (Cade Woodward), Regan (Millicent Simmonds), and Marcus (Noah Jupe). With the aid of their great sense of hearing, as the mystery monsters kill the last human survivors, the Abbotts have to teach their kids not to make too much noise. Thankfully they know sign language, as their daughter uses a hearing aid.

In a film where silence decides whether you live or die, the family needs to be close and understand one another. After a devastating tragedy, the Abbotts become even more aware of the great danger. When Lee decides to work to strengthen Regan’s hearing aid, pregnant Evelyn attempts to find the best way to handle the wailing of the baby after she or he enters the world. A Quiet Place is the portrayal of a family in the eyes of anger, but not just that. It’s meant to depict the strength of a woman who is a mother in a dangerous, post-apocalyptic world. Evelyn is not only strong for Regan and Marcus; she also tries to remain positive for the unborn baby. Having an infant in a world of monsters is not easy. Evelyn builds a unique, almost soundproof baby bed that’s supposed to lessen the intensity of the crying. Emily Blunt admitted that at first, she wanted her friend to play alongside his husband (John Krasinsky). However, after reading the script, she immediately changed her mind and asked Krasinski for the role instead. At that time, the perfect actress had yet to be selected. 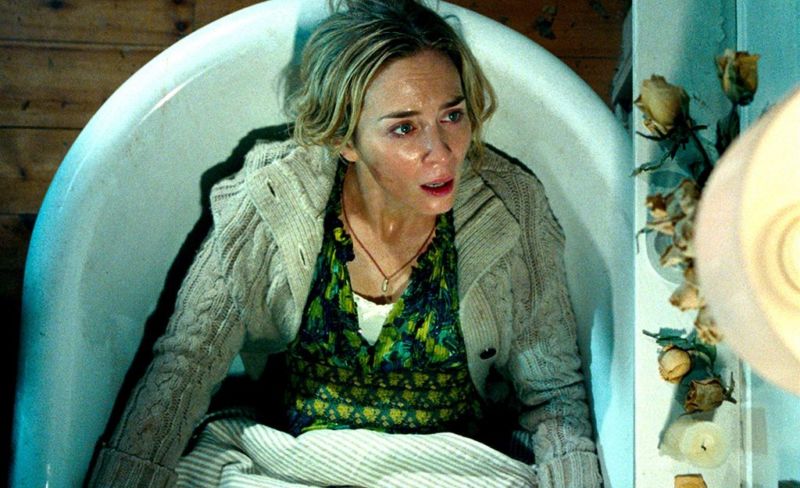 Blunt was an excellent choice – she proved it in the scene in which Evelyn gives birth. When the tension rises and the plot thickens, the character’s waters break. She not only has to go through labor in horrible, unsanitary conditions. Evelyn cannot blurb a single word, not to mention scream. At the last moment, she finds a bathtub, and while the monsters are looking for prey, she births a beautiful baby. According to Krasinsky, Emily Blunt needed only one take to shot this emotionally exhausting scene. As soon as the creators said “Cut!”, Blunt came back to her true self.

Another crucial thing in the plot of A Quiet Place is family dynamics and communication between the members. Marcus and Regan are teenagers, and there are things they don’t understand. Regan rebels against his dad. Marcus worries a lot, but Lee attempts to explain to them that the world is the most dangerous place for humans, so the connection is a key. 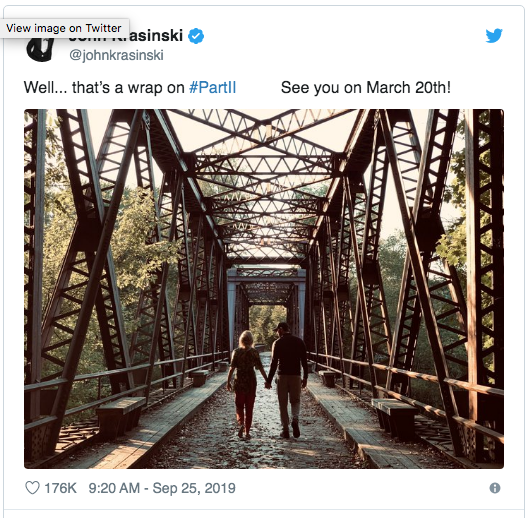 As there are only around 23 lines of voiced dialogue and the rest is signed and subtitled, the viewers can focus on the perception of the sound of nature as well as silence. The creators – John Krasinski, Bryan Woods, and Scott Beck, came up with the story where words are not necessary – the action and emotions are. That’s what makes A Quiet Place so unique. The sequel was announced not too long after the premiere of the first movie. Just two weeks ago, Syracuse.com published an article in which they confirmed that the sequel wrapped filming in Western New York. Krasinsky also posted a picture on his Instagram.

If Emily Blunt is on the board, I’m always on board!