Who Will be the Villains in Marvel’s Hawkeye?

Home » Who Will be the Villains in Marvel’s Hawkeye?

Set to premiere on Disney+ on November 24, Hawkeye is the new transition of a character from the Marvel Cinematic Universe (MCU) to TV/streaming. It’s also a show that comic book and movie fans can’t miss.

First, because it’s an opportunity for Jeremy Renner to shine as the protagonist with his Clint Barton/Hawkeye. He is, after all, the “regular guy” of the Avengers and the only one of the original lineup (considering the 2012 film) that hasn’t had a movie of his own yet.

And second, because the miniseries is inspired by one of the best runs of the hero in the comics, in which Barton teams up with his young pupil Kate Bishop to face a group of Eastern European mobsters. Written by Matt Fraction, the award-winning story arc was published between issues 1 and 22 of Hawkeye (from 2012 to 2015).

In addition to foreign bad guys, the official trailer showed that other comic book villains will also appear (or may appear) in Hawkeye . Let’s take a look at what is already known and the possible surprises we’ll have in late November.

A stereotypical group of Eastern European gangsters, all dressed in the same purple tracksuit and calling each other “bro” all the time. Barton dubs them the “Tracksuit Draculas” and has several clashes with the group in the comic book arc. Judging by the trailer, they will have a prominent role in the miniseries too – wearing their famous tracksuits, of course.

The gang’s leader in the comics is named Ivan Banionis. He is the owner of an old New York building where Hawkeye is living. Banionis tries to evict the residents by force, but Barton’s insistence on staying there provokes the fury of the criminals involved in a millionaire real estate scheme.

Lucky the Pizza Dog, who becomes Hawkeye’s mascot during the story arc, can also be seen in the trailer. The dog originally belonged to the Tracksuit Mafia until it was rescued and adopted by the hero.

Although she doesn’t appear in the trailer, one of the original situations that Hawkeye is set to include is the return of Florence Pugh as super-assassin Yelena Belova. In Black Widow’s post-credits scene, Yelena is paying her last respects to her “sister” Natasha Romanoff (Scarlett Johansson) after the events of Avengers: Endgame.

Then comes the mysterious Valentina Allegra de Fontaine (Julia Louis-Dreyfus), responsible for the John Walker situation in The Falcon and the Winter Soldier. Yelena’s current employer, Valentina announces that the assassin’s next target is the man responsible for the death of Black Widow: Clint Barton! 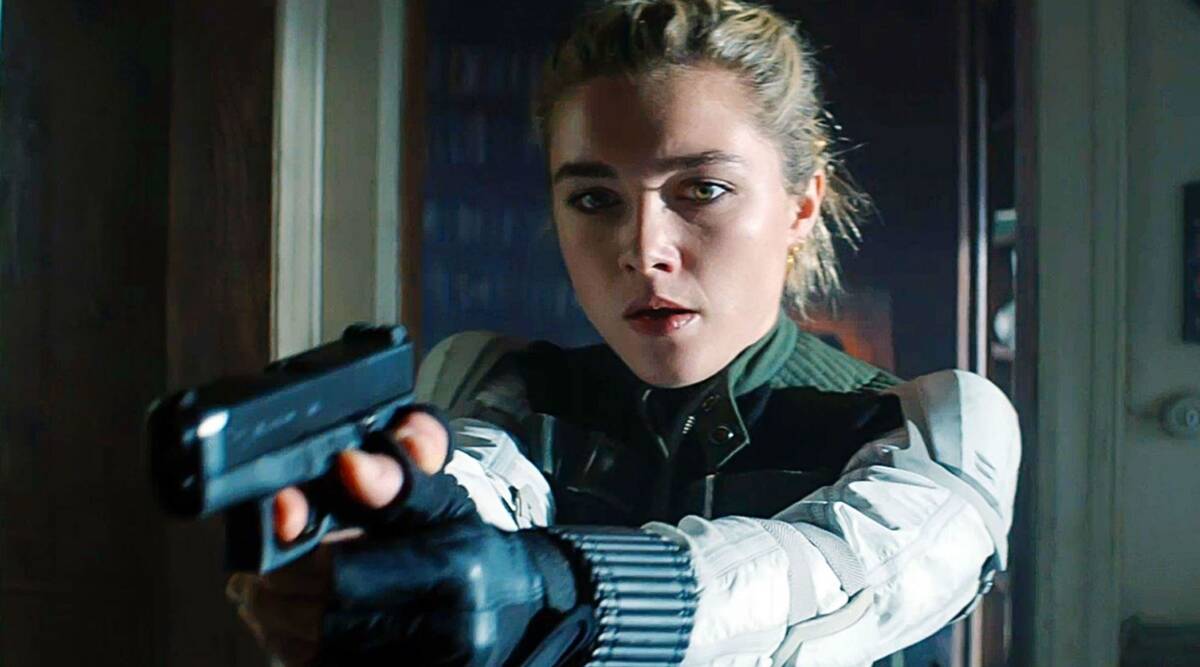 Some fans theorize that Yelena could kill Barton in the final episodes to mark the departure of Jeremy Renner from the MCU, as newcomer Hailee Steinfeld would take on the role of Kate Bishop/Hawkeye in a possible second season or upcoming films.

But the mood of the trailer points to something funnier, and it’s possible that the announced duel between the new Black Widow and the old Hawkeye will end in a draw – it could even be the beginning of a beautiful friendship.

According to IMDB, actor Fra Fee will appear in the TV series as “Kazi”. It seems to be Kazimierz Kazimierczak, a cold and deadly European hitman who wears Pierrot make-up and uses the nickname The Clown.

He was also featured during Matt Fraction’s comic book run. The Clown is hired by the Tracksuit Mafia to get rid of Clint Barton. From then on, the contract killer causes true chaos: he kills one of the hero’s neighbors and shot Barney, Clint’s older brother (nonexistent, for now, in the MCU).

Finally, The Clown attacks Hawkeye and pierces his eardrums with his own arrows, leaving the hero deaf! Well, have you noticed that the trailer shows Renner wearing a hearing aid in one of the scenes?

But how Kazi will fit into the miniseries? He’s a more serious and violent character who, again, doesn’t seem to match the lighter mood seen in the trailer. It’s worth noting that in Hawkeye #10 (2012) Kate Bishop has a quick flirtation with the villain that ends with a big kiss. Will the tragic romance between the two be amplified in the TV show?

One of the most interesting characters in the miniseries is Maya Lopez. She will be played by newcomer Alaqua Cox and appears very quickly in the trailer.

In the comics, Maya is a Native American descendant and was born deaf (in real life, actress Cox is also hearing impaired). Her father worked for Wilson Fisk, the Kingpin. One day, Fisk decided to kill the associate and adopted the girl, giving her the best education and martial arts training possible.

In a Daredevil story arc published in 2001, Kingpin convinces the now-grown Maya that the blind hero of Hell’s Kitchen was responsible for her father’s death. She then takes on the nickname Echo – based on her ability to copy the motion she sees, allowing her to mimic the rival’s fighting techniques.

Echo had a tortuous trajectory in the comic books, including those deaths and resurrections so frequent in the Marvel Universe. Maya Lopez was also the first to wear Ronin’s outfit to face villains, as MCU’s Hawkeye did in “Avengers: Endgame”.

The character development in the miniseries is a mystery, but she will likely transition from villain to hero later in the season. After all, Variety announced that Disney has already given the green light to a spinoff starring Echo.

According to IMDB, Mexican-American actor Tony Dalton will appear in “Hawkeye” as Jack Duquesne. It’s a possible reference to Jacques Duquesne, who in the comics was a villain called The Swordsman and also the mentor of young Clint Barton.

Little is known about the cinematic Hawkeye before he joined the Avengers. When the character made his MCU debut, in Thor (2011), he was already an agent of S.H.I.E.L.D. But in the comics, the original Hawkeye started as an enemy of Iron Man!

Gradually he moved to the right side of the law and different writers explained his past as a circus performer and a thief. The man responsible for teaching Barton everything he knows, both in the use of the bow and in criminal practices, was none other than Jacques Duquesne aka The Swordsman, as revealed a long time ago in Avengers #19 (1965).

The character had another of those crazy Marvel Comics trajectories: from villain, he was promoted to hero (and member of the Avengers for a while), and then died and resurrected a few times.

There’s a moment in the trailer when a figure holding a sword appears from behind, and this is probably Duquesne/Swordsman. But it’s also a mystery how the character will be adapted: he may appear in flashbacks showing Clint Barton’s past, or as the former master who returns to challenge his pupil.

THE CIRCUS OF CRIME

There is a scene in the trailer where Clint and Kate appear wearing a tuxedo and a long coat. Comic book fans speculate it may be a reference to Hawkeye #2 (2012), which shows the heroes going to the premiere of a new luxury spectacle called Cirque Du Nuit.

It is, in fact, the infamous Circus of Crime, a criminal organization that has been haunting the Marvel Universe since the Golden Age! All performing artists are criminals led by the big boss Maynard Tiboldt aka The Ringmaster – who uses a device in his hat to hypnotize his enemies.

In the arc written by Matt Fraction, the Circus of Crime tries to steal rich New York spectators but the Hawkeye duo saves the day. Barton even finds another Swordsman-trained pupil, and this may be another way to introduce the Duquesne character in the miniseries.

Wilson Fisk has been mentioned several times throughout this article and some fans suggest that the notorious Kingpin might also appear in “Hawkeye”.

Nothing has been officially revealed yet, but the miniseries confirmed villains’ relationship to Kingpin is pretty obvious: in the comics, Echo is Fisk’s protégé and the Tracksuit Mafia works for him. Additionally, IMDB confirms Native American actor Zahn McClarnon as William Lopez, the father of Maya/Echo that Kingpin kills in the comics. 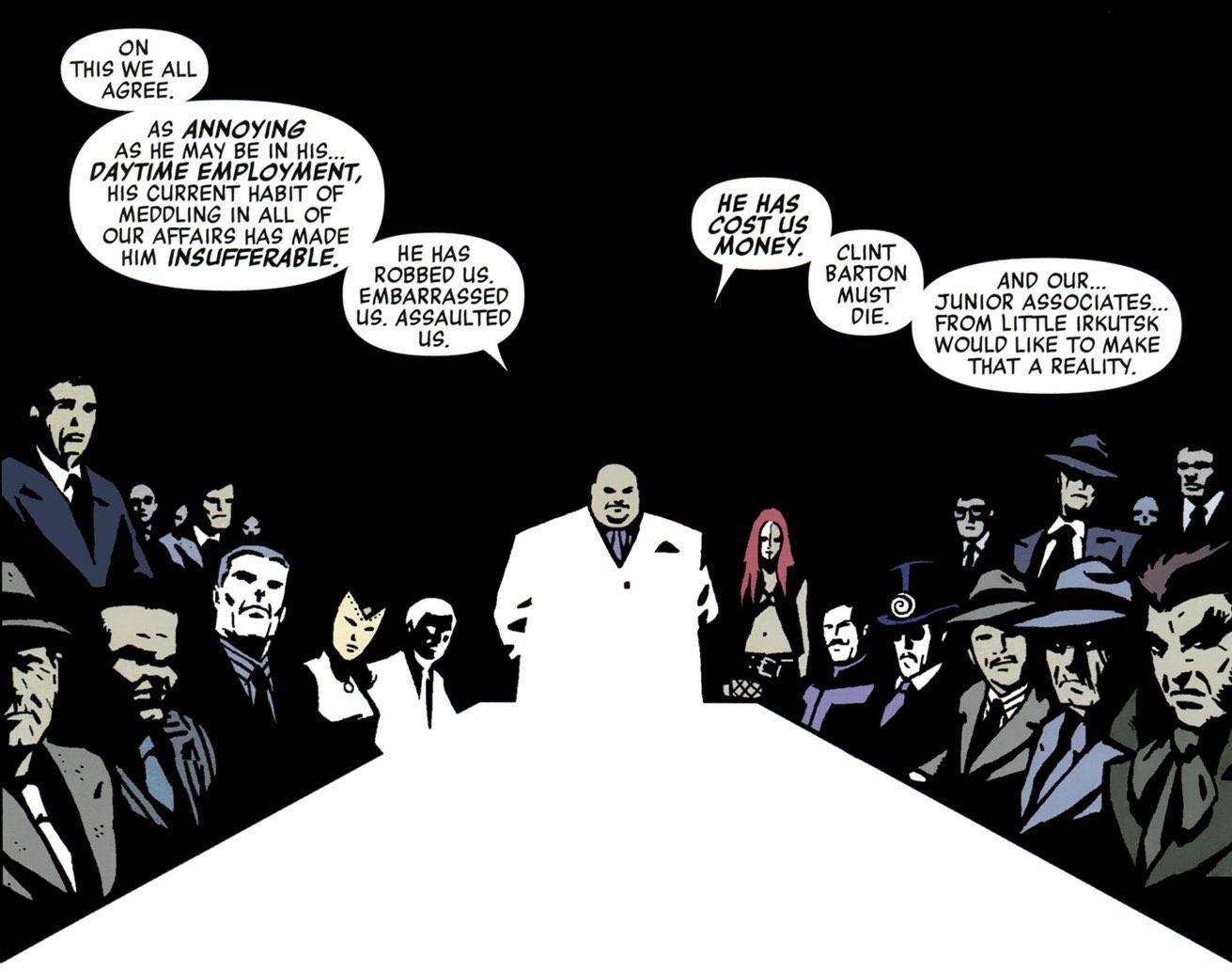 Fans of the Netflix series Daredevil (2015-2018) are dreaming of the return of Vincent D’Onofrio, responsible for an incredible performance as Kingpin in that show.

But don’t be surprised if a new actor is called in for the role. After all, good ol’ Wilson Fisk has already been played by two other actors before: John Rhys-Davies in “The Trial of the Incredible Hulk” (1989) and by the late Michael Clarke Duncan in that 2003 Daredevil movie with Ben Affleck.

Now it’s time to hold back the anxiety and wait until November to see how many of our arrows hit the target! In the meantime, you could continue getting more hints and clues on the baddies by keeping an eye out for the latest merchandise from Hawkeye via Nerdythings.net

Hawkeye premieres on Disney+ in November.

One Chicago Ships Check — In: October 20