With A Beautiful Day In The Neighborhood coming out this week, I have been thinking a lot about Mister Rogers. I know that as a grown adult that kind of sounds ridiculous. Why?

Because it was so long ago. But one thing I have learned getting older, is that the things that I once though nothing about are some of the things that have shaped me the most in my life.

Mister Rogers used to walk on the screen every week, with his even-toned, calming voice, welcoming you into his home and your imagination. He would make you believe that you could do anything – but above all, he would remind you that kindness was something that you could exercise freely, and grow from.

Mister Rogers would make you feel safe, as if he was talking through the television, straight to you. You knew that in the chaos of life, Mister Rogers made you feel okay.

He made you feel as if though whomever you were – you were loved.

And he taught us many things – but the five things that I have realized that have stuck with me – well, they are a deep part of me. 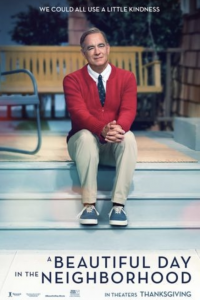 YOU CAN LOOK UP TO PEOPLE YOU DON’T KNOW

I didn’t have the best childhood. Parents were absent and when they were around it was normal that I was invisible to them. Not trying to tell you a sob story, but trying to communicate my state of mind. For me – I didn’t have people to look up to in my everyday life. But watching Mister Rogers, I felt like I did. I felt like he was talking straight to me, telling me about what was right and what was wrong. He was making sure that I knew that I wasn’t alone.

I never met the man, but I looked up to him. He was like the grandpa that I didn’t have. He was a moral compass. He was there when others weren’t. And it’s completely weird that a stranger had that much of an impact, but they did.

KINDNESS IS THE BEST THING ONE CAN EXHIBIT

Kindness isn’t easy. You would think it would be, but it’s honestly one of the hardest things in the world. It feels scary and vulnerable. It is hard to not be reactionary.

Mister Rogers was kind. He was a man who showed every person that came into his living room kindness. He wasn’t reactionary. He was kind.

He gave it away easily and that was a special thing that he did and taught others.

But Mister Rogers would talk to you through the television as if you were the only person watching. He would look into the camera as if he was looking straight into your eyes.

And to this day – though I am not always good at it – I try and make everyone feel special. As if they are the only people that matter in the world.

It will make all the difference in the world to them.

Sometimes it seems weird to say – use your imagination.

When I was a kid, I was told that I was too imaginative. That I needed to be grounded more in reality. I was in trouble for staring into the sky, for making up stories (not lies – literal stories that I would write). People didn’t get that my brain was always going.

But watching Mister Rogers on the television and the way that he would use his imagination and show that we should too – that meant the world.

Because I didn’t feel different.

I felt at home.

If there is one thing about Mister Rogers that is and always will be iconic – it is his sweater. It’s that Grandpa sweater that is somehow in style now.

Mister Rogers was authentic and in a time where we don’t have much of that anymore – it is good to see that authenticity that is missing.

A Beautiful Day In The Neighborhood opens November 22nd.

Keep Calm, Trope On: Anyone Can Die