What movie? Merry and Bright.

The story begins when Cate (Sweetin), CEO of the Merry & Bright Candy Cane Company, meets Gabe (Walker) during the busy Christmas season. She assumes Gabe is the suitor her well-meaning mother is trying to set her up with when in reality, he works for Empire Corporate Recovery, which has been hired to take a closer look at Merry & Bright’s operation and find ways to make the company more profitable. As Cate and Gabe begin to work together, they find ways to elevate the business and find that they have more in common than savvy business sense. Starring: Jodie Sweetin and Andrew Walker.

It definitely fits the mold of a Christmas movie on Hallmark. Somethings wrong, someone comes to fix it, and they fall in love after a catalyst.

And I am here for it. 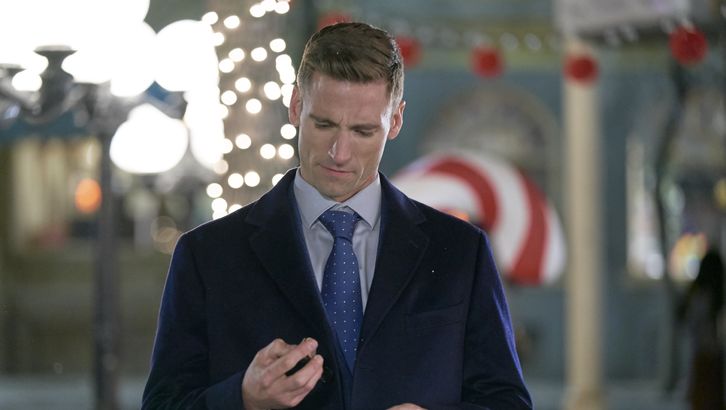 So what is Merry and Bright? Well it’s a candy cane company that was founded by Cate’s Grandma. Cate took it over a year ago and she is getting settled in her new role. She doesn’t want to upset the balance, though she’s got ideas. Lots and lots of ideas.

The board has decided to bring in someone to help the company, and that’s Gabe. Gabe has a ton of ideas – some good, some bad. None that Cate wants to listen to. She’s set in her ways, and I personally felt like she was coming across that anything she did she felt was disrespecting her Grandmas legacy.

The company however, needs to make changes.

So after they finally let some walls down, and Cate sees that Gabe can really help her. What can they do year round that will help Merry & Bright earn money.

Grandma’s left behind a lot of recipes and Cate makes some her chocolates. Gabe likes them and thinks that it may be the answer. So he sets her up with a possible investor.

Grandma’s recipe book is one of the most well put together recipe books ever. LIKE EVER. Drawings and everything. My Grandma’s was a lot of notes, scratched out things, and not a drawing in sight. The woman wasn’t as put together as imaginary movie Grandma.

So, Cate heads to New York with Gabe to pitch her chocolates. There are a lot of different recipes and the dude they are pitching them to – well, he doesn’t really have an opinion. Like CEO dude is boring AF, acting like he’s asking all the right questions – but what he’s doing is being annoying.

But after he acts like nothing is going on – he ends up calling Gabe and letting him know that his wife likes the chocolates, and he wants to make a deal. Cause you know the one thing he’s missing is an artisan chocolate company.

I am soooo sure that is what all the CEO’s think about missing. Look, it’s a stretch, but what part of Christmas movies aren’t a stretch?

Gabe is so excited about the deal, but Cate – it makes her think again. Is this what she wants to do? Make chocolate the primary thing that they do and candy canes second? Nope. She doesn’t.

And finally we see more of Grandma’s cookbook – and she’s got all these different candy cane flavors.

Cause personally, I hate peppermint, unless it is peppermint ice cream (don’t judge – I am weird). So of course she sends the boring CEO some and he sees that it can be their thing.

Like really? Have none of these people been to a CVS? Candy canes in a lot of flavors are a thing. I cheat (I don’t eat sugar) and get cherry ones all the time.

So, now this makes candy canes a year round thing?

In the movies yes. In real life, I am still asking who wants that. Part of the excitement of candy canes is that you get them at a special time of the year. They are not peeps – coming up at every moment.

Overall, this movie was so sweet it wasn’t great – but it was still enjoyable – if you like Splenda.