Decade Roundtable: Most Underrated Book Series Of The Decade

Home » Decade Roundtable: Most Underrated Book Series Of The Decade

Books are the cheapest form of travel – taking you away to another space and time – away from your life and away from all the complications that life can bring.

We’ve read hundreds of books – thousands between us all – and we have very different tastes. Very strong ones at that too. In a world saturated with books it’s hard to read them all. But the ones we do – the ones that haven’t gotten enough recognition in our opinions are the ones we feel were underrated this decade.

Erin: The Summer I Turned Pretty came out in 2009, and so I get that it’s out of this decade, but since its two sequels came out this decade – I am going with this one. Jenny Han is one of the most talented writers in the world. The way that she weaves stories, makes characters come alive, and draws you in – is unlike any other author. Jenny makes every word she writes pop off the page, pull you in, and never let go. The Summer I Turned Pretty Series is absolutely engaging, fun, and makes you believe in love – even when it’s complicated. You can get through it. Jenny Han’s books ignited a love of reading in me and I don’t think that she gets the credit she deserves. She’s just amazing.

Jenny Han books should be read.

Lizzie: To All the Boys I’ve Loved Before, and it’s sequels, by Jenny Han. It took Netflix for most people to pay attention, and even now, I don’t see the spike in book sales I would have wanted, especially considering these books are really, really fun. 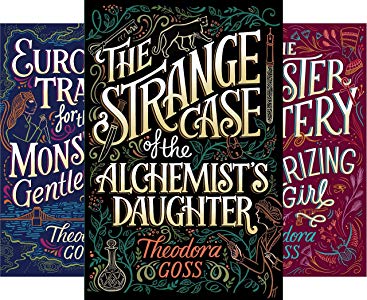 Lyra: The Extraordinary Adventures of the Athena Club by Theodora Goss is severely underrated. It tells the story of a collection of extraordinary women from Victorian era England that come together to solve mysteries, kick ass, and rival the smarts and power of the great Sherlock Holmes, who appears in the book series. You have Mary Jekyll, Diana Hyde, Justine Frankenstein, and so many more women to cheer on and fall in love with.

Grace: The All Soul Trilogy. I’m sure these have spiked in popularity since the show came out, but I honestly don’t even think many people even know about the television series (which is a crime if you ask me). It may be that we have a bit of vampire and witch fatigue in pop culture, but I am a sucker for that kind of stuff. If more people knew of this series, I think they would become obsessed with it as well.

Jasmine: I will take any and every opportunity to pimp the shit out of my favorite indie authors.  I’m going with B.B. Reid’s When Rivals Play series.  Her writing is amazing and I love her characters so much.

Shana: Ever since I found Jessica Cluess’ A Shadow Bright and Burning at my local library, I’ve been screaming at everyone I know to read it and the rest of the Kingdom on Fire trilogy; but it still hasn’t taken off like some of these other YA fantasy epics. Get on it, people. For the love of God, please.

What books have been underrated to you this past decade?

2019 End Of Year Lists: Moments That Restored Our Faith In Humanity