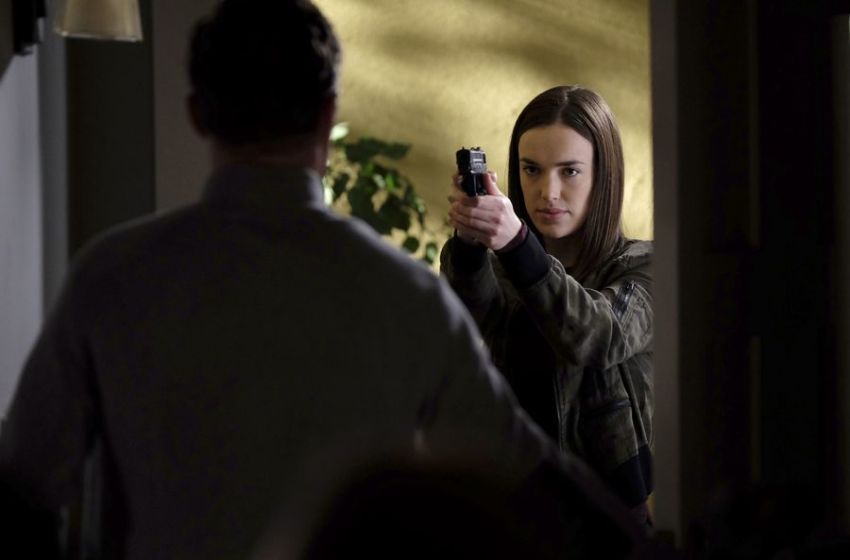 It has been a long while since a episode of tv has made me as nervous as “Farewell Cruel World” did while I was watching it. Don’t get me wrong though–This is a very good thing. As for much of the HYDRA arc, this episode of Agents of S.H.I.E.L.D was unpredictable, emotional and had a ton of WTF moments in from start to finish. Emotions ran very high for each team member and the shocks don’t look like they will be stopping anytime soon. So lets start with a glimpse back into the past and see what a certain speedster is up too.

We go back 11 days ago to when Simmons and Daisy were put inside the Framework. It has been interesting that each arc has only spanned a short amount of time. As we revisit this moment, Yo-Yo takes command and promises to keep them safe while they rescue the others. Now as we return to the present, the Quinjet is still up in the sky but lacking in power thanks to keeping Daisy and Jemma in the Framework world.

Later, Agent Piper comes up with the idea of shutting off the cloaking so the can use that power to keep the machines going. See, good ideas like that get you a name! This was a short little view into what kind of leader Yo-Yo might be someday. Sure things aren’t great in the quinjet but all things considered, she was doing a good job. Also leave it to the ladies to keep a level head while the guys spent the scene going “I’m cold. I’m Cold!” Come on dudes.

Meanwhile, back in the Framework world, team SHIELD is holed up waiting to go find the secret backdoor exit to the framework. Daisy gets to meet Trip finally and hugs him. Trip being chill as always thanks her for the hug even with not having a clue who she is. It was a nice little moment between the two.  Daisy is then ready to go but Simmons isn’t yet. Not without Fitz. She cares so much for him even after everything that has happened in the framework. She just doesn’t know what changed Fitz so much to make him so evil here..until May mentions his father. It all adds up to Jemma finally as she realizes the one thing that changed for Fitz is his father. At this point, Jemma is desperate to get Fitz back. So she makes the one choice she has left– She goes to confront Mr. Alistair Fitz.

Now this isn’t the smartest move Jemma has ever done but she has no choice. No other way to get Fitz to go with them to the backdoor. So Jemma gets Mr. Fitz to call his son on the phone after his successful attempt at extracting the backdoor escape spot from Radcliffe earlier. The call goes smooth at first , even with Alistair telling Leo he loves him. Then Alistair warns him that Jemma is with him and attacks her all while still on the phone with Fitz. A struggle ensues and Simmons shoots the old man dead. While this hurts Fitz deeply, I cheer like a maniac. Fuck you, Daddy Fitz! Take your toxic masculinity and rot in cyber-hell forever.

Later, Fitz’s finds his dead dad’s body and seems even more incensed to find Simmons and the others. Even though it was in self-defense, Fitz doesn’t care. This Fitz has hate in his heart. He even drags along Radcliffe to force him to help. This arc has shown a new side to Leo Fitz and I don’t like it. I miss goofy, nerdy Fitz. This Fitz is just plain nasty.

A LEAP OF FAITH

So while this is going on, we get another Philinda moment as May and Coulson chat about all this “Real world” talk. May is skeptical as heck while Coulson is all in in his belief. Very Scully/Mulder of them as they also flirt a little like them too. This gets interrupted by Simmons’s return and the team is ready to go…..except for one. Mack is reluctant to go on the mission and it shows when they get to the spot where the backdoor is.

Finding the spot in a industrial factory (show loves their factory scenes), the spot is now a pool of molten steel. Everyone has different reactions to this as you would expect but the most shocking one is Coulson’s. While May admits she never had faith , Phil still believes. He’s ready to take a leap of faith of sorts.  That faith inspires Daisy to quake the steel aside and BAM there lies one portal right there!

Sadly , this moment is interrupted by HYDRA thugs who shoot Coulson! He’s wounded pretty badly as I can’t stop staring in shock. May takes out the thugs , goes to Phil’s side and damn you if you can’t feel the chemistry here. May tries to reassure him that he’ll be okay but Coulson knows he won’t be as he has deja vu to a moment like this before. So they decide the only thing to do is take one last leap of faith in this framework world. He’s believed since almost the beginning and honestly he has no choice. So Coulson makes the jump…

…And suddenly wakes up back in his old human body back in the sub. After taking a moment to check up on May (MY FEELS), he grabs a scalpel from the table and is ready to cut up AIDA once and for all.That gets interrupted by May making the leap into the real world and the PHILINDA feels are stronger than ever!!

A REAL HUMAN BEING

While all this is happening, AIDA goes to enact her master plan. Well first she wants Fitz to come back and not chase Simmons in the framework world but Fitz refuses. So she then goes to speed up the machine. Thanks to the Darkhold magic in it, she is very quickly turning into a human being with real emotions. Though I think she had some in the framework too – obsession, jealously, hate. Those seem like pretty real emotions and feelings to me.

Back in the Frameworld factory, Mack is shocked by what he has witnessed. Even as he see the data that makes up the world still doesn’t feel real to him. As Daisy tries to get him to go through the portal, Mack refuses. He can’t leave Hope behind. Now I know Hope isn’t “real” but imagine Mack here– He’s a father, the biggest role a man could ever have in their life. He loves Hope with all of his heart and soul. He just can’t  abandon her. Daisy tries to point out that she’s only a part of the framework but Mack is not listening. This world and his daughter feels real to him. Daisy tries once more to convince him to stay telling him how much she and others (YO-YO) love him but it’s too no avail.

Simmons is ready to make the jump into the portal when she is stopped by Fitz. This is such a emotional tense scene as Fitz is angry about his father and Simmons is angry at what Fitz has become here. She snaps at him when he refers to AIDA as “Ophelia”

“Its name is AIDA, Artificially Intelligent Digital Assistant, and stop making excuses for it!”

There is only so much any of us can take and Simmons has done had it. This Fitz is pure awful and proves it again by shooting Simmons in the knee. WHAT THE FUCK FITZ?? He is about hurt Simmons more when Radcliffe knocks him out thankfully and throws him into the portal. Radcliffe may have messed up by creating the framework world but at least he is trying to help fix it a little. I don’t hate Radcliffe, just feel sad for him.

So Simmons and Daisy make the jump back into the real world just in time as Yo-Yo’s quinjet is now being targeted. Yo-Yo asks if they were able to save Mack and Daisy apologizes to her. The look and sad bow of her head afterward shows how much Yo-Yo really cares for Mack and how much it hurts her that he didn’t come out.

Back in the sub, Fitz is fully awaken and shaken to his core by what he did in the Framework. He killed people there, he killed Mace technically!! And don’t forget about the cold-blooded shooting of Agnes. Coulson tries to convinve him he is not a bad person but Fitz’s soul has been damaged maybe permanently.

This moment is interrupted by a fully human AIDA who tries to convince Fitz that they belong together to remake the world. So AIDA’s first act in her human body is to be a creepy obsessive stalker. Cool cool cool. Seriously, AIDA is scary in that she is love with Fitz and Fitz is still discombobulated enough to be taken away by AIDA and her darkhold powers.

PLEASE PLEASE PLEASE don’t let her con Fitz into helping her. I want the old, good Fitz back. The one that loves Jemma Simmons with all his kind heart. Not the Fitz who thirsty for Madame Hydra.

Meanwhile, back in the Framework Mack returns to his daughter Hope who is being watched over by Trip, the new leader of SHIELD. (I think he is since Ward is still trying to fight for control of the broadcast center.) Hope asks her dad what happened to the others and he tells her that like Dorothy in the ‘Wizard of Oz”, they went back to Kansas. As Hope asks if they can go too, the look Mack gives as he tells her they are staying there is almost haunting. He knows this isn’t a real world but how can he not believe in what is in front of him?

Another excellent episode concludes with  most of the team back in the real world , the questions continue to come forward. What is AIDA up too? Can Fitz finally wake up? Willl Mack stay in the Framework forever? How will the team reunite? AND CAN FITZ AND SIMMONS EVER CATCH A BREAK ON THIS SHOW? Damn I love this show but it can be hell on a person’s nerves.

The Defenders Trailer Debuts, and what a Trailer it is!