If we are being very honest, I have a love/hate relationship with Christina Ochoa’s roles.

The actress was born in Barcelona, Spain. She’s the daughter of a famous sculptor, Victor Ochoa. She’s the grand niece of a Nobel Prize winner. But all of that doesn’t define her. She’s definitely pathing her own way. Ochoa is best known for her current roles on TNT’s Animal Kingdom and as the lead for SyFy’s Blood Drive and The CW’s Valor.

Personally – these days I love to hate her character on A Million Little Things. Seriously if you haven’t watched it, do yourself a favor and watch it. You’ll dislike Ashley too. Yet, at the same point you’ll want to dive into the TV and save her.

But beyond being an actress, she’s wicked smart. She studied Oceanographic Engineering in Las Palmas University in the Canary Islands and Advanced Marine Biology in James Cook Univ. in Australia. That’s impressive.

We asked Ochoa a few questions about her roles, her life, and of course her hair. Judge us all you want for the last one, but girl has amazing locks.

What is the most important thing for you when choosing a role?

The writing – especially of the relationships between my character and the others… I love complicated, nuanced dynamics that feel real.

Tell us a little bit about your role on Animal Kingdom? What drew you to the series and the role?

Renn is all the wild and visceral sides one tends to repress. She’s unapologetic and I love that. Animal Kingdom tackles so many of the dark sides of human nature in a way that still allows you to empathize and fall in love with the characters… I’m beyond lucky to be a part of it.

We loved Valor. It was it about playing Nora that was so important? What made her not just being a trope so important? 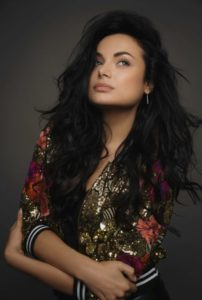 Nora was not just a “tough” woman, which we see a lot of… She is also so incredibly competent in her field that her sense of identity is wrapped into that. Her confidence stems from her expertise, so when it becomes threatened and she loses control or fails… it works a number on her and she struggles to find comping mechanisms. I loved exploring that.

You’ve chosen quite a different role from what people are used to seeing you in, A Million Little Things. Ashley isn’t the most loved character. What is it about her that we should like? Is there anything about her that is redeemable?

Haha I try not to worry about “liked” – that’s the audience’s decision and completely out of my control after they yell “cut.” I worry more about “interesting” when picking a part, and she was so different from me, so guarded, so confusing… I found it very interesting to tackle those motives. Her reasons are still coming from a place of love. It’s a typical “ends justified the means” mentality for Ashley. She doesn’t think she’s bad.

You have a passion for the ocean. Can you talk a little bit about that and why people should pay more attention to what is going on with the oceans today?

The ocean is responsible for not only food sources, climate control, and resources… it’s a big part of the machinery that moves industry, technology, population distribution, and world economies. I don’t think there’s any part of our realities that AREN’T impacted by the health of the ocean. We just forget sometimes how so. Reminding people of that connection is a first step into fixing the problem.

What advice would you give to young girls out there looking to forge their path in life?

There’s a saying: “Motivation is a push. Inspiration is a pull.” I’d say find the pull, and follow it. It sounds like a cliché, but working hard isn’t always working smart and it’s so important to put your heart into the things we do. Always. Follow the “pulls.”

Side note – seriously what do you use in your hair – cause it’s amazing.

Salt water and sand. As often as I can. 🙂

Did you catch Ochoa on this season of Animal Kingdom? What have you seen her in?

Some Other Stuff You May Enjoy:

'Euphoria' 1X07 Review: "The Trials and Tribulations of Trying to Pee While Depressed"

Lifestyle Lift: Why Choose Minimalism in 2019?