Christmas movies are a part of us. We look forward to them every year and are so very judgmental over them. The Knight Before Christmas has been one of our favorites of the season.

Medieval magic sends a 14th-century knight to modern-day Ohio, where he falls for a high school science teacher who’s disillusioned by love – what is not to love about that.

We have the chance to talk to the movies costume designer, Barabara Gregusova about her vision for the film and how to bring it to life.

Barbara is a costume designer and jewelry artist, born to fashion designer Elena Gregusova and photographer and graphic designer Martin Gregus in Bratislava, Slovakia – an artistic family that extends back to her grandfather, a sculptor and jeweler, and her grandmother, a textile artist. Art is her blood (and costumes are definitely an art. 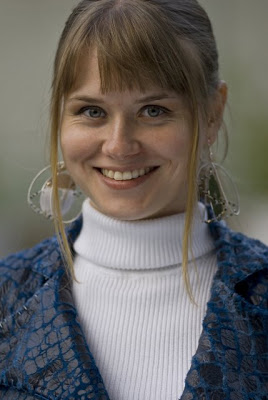 How do you turn a medieval man into a modern love interest? Is there a particular journey or a particular way you wanted Sir Cole to look?

For Sir Cole we knew he was going to wear a 14th century suit of armour at the beginning of the film. First, I had to research the armour of the period. Based on my research Monika Mitchell (the Director) and I discussed which visual images of these we liked the best. Then we had to source it. Once we did the initial fitting with Josh we had to figure out all the logistics of Sir Cole’s (Josh’s) anticipated movements based on the script. For example, he has to be able to sit in it in a car, ride on the horse, and kiss Brooke, plus he is going to be hit by a car, etc. You have to keep all the scripted action notes in mind choosing the right costumes. Originally Sir Cole was supposed to wear a medieval helmet but it was too obscure for the scenes we needed to shoot and with the intimacy of them so we ended up going only with the chainmail hood.

Transporting him to modern day we slowly took the 14th century layers away and replaced them with contemporary clothes. The tunic over the sweatpants, then adding the ugly Christmas sweater, and eventually working up to the designer sweaters and overcoats. All modern clothes were given to him either by Brooke or Madison so we could go over the top with the ugly Christmas sweater look and stylish with the clothes, which came from Madison.

What that in mind, is the intention to have Vanessa Hudgens’ Brooke not match Sir Cole, but compliment him? Visually, how do you achieve this?

They were always supposed to compliment each other. Sir Cole starts out wearing his suit of armour with the red cape. Brooke doesn’t wear red until the Feast scene (the dress in the poster!). I didn’t want to use red on Brooke for her day-to-day looks. Period costumes have a lot of beautiful details and I wanted to apply that on Brooke’s wardrobe so I was looking for interesting pieces which looks a little bit like chainmail but in modern form. I wanted both of them to have something in common in a very subtle way despite their different worlds.

From script to film, there’s a process of creating a look, one that people have many expectations about, especially when it comes to holiday movies. How does that start for you?

Each story or script is very different and because it is a holiday movie it doesn’t mean everyone has to wear green and red. When we used Christmas colours I didn’t want it to be forced, I wanted it to be natural, it had to work for the scene, the character and the actor’s body type.

Is it more fun to create period pieces? Or is a modern look more complicated than it sounds, because of the expectations?

I like to build costumes from scratch. Doing research and sketches, looking for fabrics and notions and then bringing the design to life. I mean that is my favourite because if you have the opportunity to build the costume if period, futuristic, or modern you can imagine whatever you want and you do not have to rely on what is in stores or rental houses. So I would say creating anything from scratch is a challenge, but it is fun. However, when it comes to modern costumes everybody has their personal opinion what they like and don’t like. For me as a designer I have to put those personal opinions aside, because if I wouldn’t wear something it doesn’t mean the particular character shouldn’t. Also, I have to think about each character’s personal style and then how they will look together with others. The modern look is more complicated than it sounds.

There is a difference in pre-production when you are designing a feature film where you are creating the look for the show for the first time and working on a series for five seasons where we already have established characters and actors. For example, with KBC I was able to work with the script I was given from the start. On WCTH we go through many rewrites, so I have to work based on my experiences and knowledge of what is needed for each actor and their closet. It is a differently paced environment on WCTH. We shoot two episodes per block and simultaneously prepping the other two episodes for the next block, so you are in a constant rush. For contemporary aspect of KBC you need to know your cast – you can have a visual idea of what you want to do for the costumes in the film, but until you know your cast you cannot really build the whole closet for them. The fittings are where everything comes to place – I always find it amazing when things work because you are dressing people you have never met before.

What’s your favorite thing about this job?

For working on KBC: It is hard to pick one. I was really excited to design both period and modern costumes, to work with Netflix and Vanessa. When I read the script first time I knew I wanted to design and build costume for the Crone from scratch and working with Ella Kenion was very lovely experience.

I do not usually get a chance to see the final cut of the film I worked on so watching The Knight Before Christmas for the first time was amazing, watching Josh and Vanessa and all our amazing cast on the big screen and not overanalyzing my costumes and be just taken by the story like everyone else was a great experience. Everyone just did such an amazing job that after watching the movie I could only say that it is perfect, at least for me.

The Knight Before Christmas is airing on Netflix now.